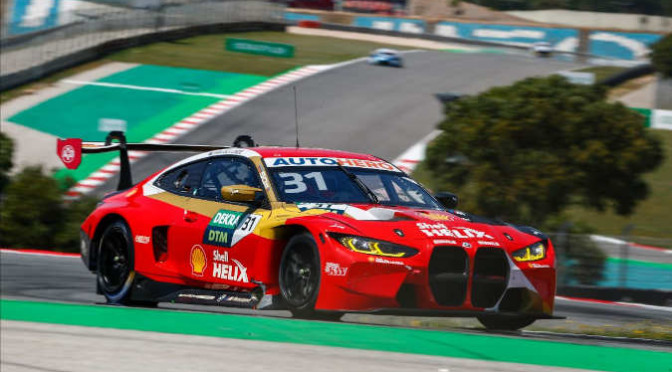 A stress test for the DTM drivers: temperatures well over 30 degrees have been forecast for this race weekend (17 till 19 June) at Imola in Italy. These result into asphalt temperatures of up to 50 degrees and above all up to 70 degrees in the cockpit. Air conditioning would surely be helpful, but most of the drivers voluntarily do without it, even though most of the cars are equipped accordingly. “Our new Audi does have air conditioning, but as this costs power, I rather not switch it on,” three-time DTM champion René Rast (GER, Team ABT) says. Second in the drivers’ standings, Mirko Bortolotti (ITA, Grasser Racing) doesn’t even have this choice. “In the cockpit, it gets incredibly hot, but we are used to that. We don’t have air conditioning in the Lamborghini anyway.” Meanwhile, Ferrari driver Felipe Fraga (BRA, Red Bull AlphaTauri AF Corse) is certain: “Even if Mirko had air conditioning, he wouldn’t use it anyway.” Only South African Sheldon van der Linde (Schubert Motorsport), coming to Italy as the DTM points’ leader following his double race win at Lausitzring, surprised with his “cool” plan: “I will be using my air conditioning one hundred percent! Our aircon in the new BMW M4 doesn’t take away any power.”

Für Dr. Thomas Fell, DTM’s Medical Delegate, air conditioning basically is a good investment for a podium result. “During the race of around one hour, the driver can easily make up for engine power that may be lost by superior physiologic performance.” The medic explains the possible consequences of a heat race: “The loss of fluid is extreme in such cases and has to be compensated in a consequent way to ensure that the perfect functioning of the body cells is guaranteed. Slight changes can already lead to an increased response time of the nerves or earlier exhaustion of strained muscle groups.”

In normal race action, DTM drivers are already exposed to increased heat strain, to which the fire-proof underwear and the multi-layer and also fire-proof race suit as required by the regulations contribute as well. When such high outside temperatures as expected at Imola this weekend are factored in as well, maximum performance is expected from the body. “The increased heart frequencies aren’t really new for the drivers. However, the flowing characteristics of the blood should not change. The more they sweat, the thicker the blood gets. That has to be prevented by a strictly balanced fluid management,” Dr. Fell explains.

“In their personal training, drivers should be working to make their bodies used to these maximum strain, especially in high temperatures, already well in advance,” says the medicine, also mentioning training in full gear in the sauna as a possibility. “Conditions in hot races, in which temperatures can rise to 60 or 70 degrees in extreme situations, can indeed be simulated in a good way in the sauna.”

Dr. Thomas Fell, who is responsible for the medical care during all DTM events, advices the race drivers, but likewise all the mechanics, who also have to deliver maximum performance in fire-proof suits, to avoid direct exposure to sunshine and above all to drink a lot and on a regular basis. “Special electrolyte beverages are the be all and end all.”

This weekend, DTM is racing at the Imola Grand Prix circuit in Emilia-Romagna for the first time. The races start both on Saturday and Sunday at 1.30pm CEST, broadcast live on ProSieben in the German-speaking region from 1pm. All practice sessions and both races can also be watched live on the streaming platform DTM Grid (grid.dtm.com).