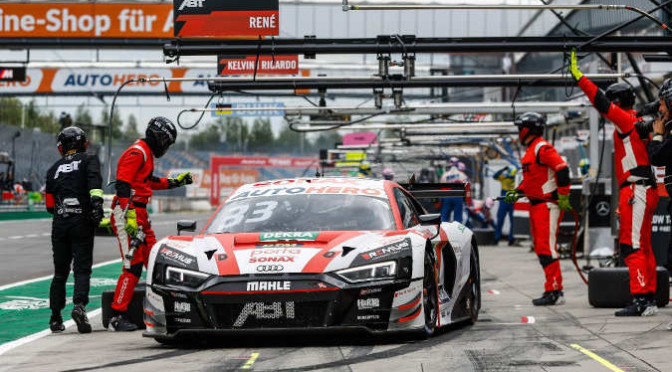 Anticipation of his DTM comeback at Imola this weekend (17 till 19 June) was clearly visible on Timo Glock’s face, and that after countless laps of testing in temperatures of 30 degrees and more. “I am enjoying every single lap,” the ex-Formula 1 driver says. “The new BMW M4 is just so much better than the previous M6.” The 40-year-old BMW works driver who scored five race wins from nine years in DTM has visibly found back to his former joy: “The car puts a smile on my face.” Nevertheless, he is quite realistic about the chances during his comeback this weekend – both races on Saturday and Sunday from 1pm (race start at 1.30pm) live on ProSieben and streamed at DTM Grid (grid.dtm.com): “A classification among the best 15 would be good, a top ten result would be great.” The joy about the cooperation with his new team boss at Ceccato Racing, the 1989 DTM champion Roberto Ravaglia is such that Glock isn’t even ruling out a full DTM comeback with Ravaglia and Ceccato Racing.

The world-class drivers will be facing a hot weekend in the Emilia-Romagna region, as points’ leader Sheldon van der Linde (RSA, BMW), Mirko Bortolotti (ITA, Lamborghini), René Rast (GER, Audi) and Felipe Fraga (BRA, Ferrari) were well aware during the traditional video press conference on Wednesday. Ferrari driver Fraga is happy to be able to race again in the “home round”, his Ferrari 488 of the Red Bull AlphaTauri AF Corse team suddenly having caught fire at Lausitzring. “I hope that we have now closed the fire chapter. My team has built an entirely new car for me, in spite of the load surrounding the Le Mans 24 Hours,” Fraga said. “Imola and Ferrari, that is a special story. And I hope for a good result, for myself, for the team and for Ferrari, preferably with a podium finish.”

Not just for Ferrari, but also for Lamborghini, Imola is a home round. Works driver Bortolotti knows the 4.909 kilometres long circuit well. In 2006, he drove his first-ever single-seater race there. “Imola is a technically demanding track with slow and fast corners. You need a good set-up and have to know exactly where to put your wheels.” Bortolotti is expecting “action-packed and close racing as usual in DTM”. Behind Sheldon van der Linde, Bortolotti is second in the DTM drivers’ standings. “So far, the season is going really well for us. We have to keep on like this.”

Bortolotti completed a brief test, a so-called shake-down, with his Grasser Racing Lamborghini Huracán on Tuesday. “It was good to get back feel for the GT3 race car after Le Mans last weekend.” René Rast, who also raced at Le Mans, knows about the problems of switching from one car to another as well. “That isn’t always easy.” At least, Rast already tested at Imola. “Overtaking is difficult at this track. However, the circuit also provokes mistakes and that is what you have to hope for, the driver in front of you making a mistake to get past,” said the three-time DTM champion who scored his first podium result with the ABT Audi R8 most recently at Lausitzring. “It took a while, but at Lausitzring on Sunday, I finally felt really comfortable in the car, the changes have paid off. Of course, I know the R8 from previous years, but sprint races like in the hard-fought DTM are a different affair than the usual endurance races.”

Points’ leader Sheldon van der Linde is the one everyone is after. “Lausitzring was simply great, I am still totally happy. The joy, particularly among my fans back home in South Africa, was huge.” His goal: “Imola is an entirely new race track for me. It will be a tough weekend. In any case, I want to score as many points as possible.”