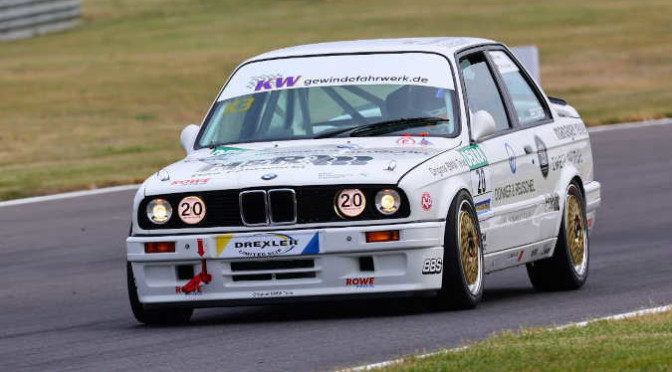 Memories of racing duels between BMW and Ford from back in the day were triggered during the Sunday race of the new DTM Classic Cup at Lausitzring Turn 1 powered by Autohero. Three BMW and a Ford staged a sensational four-way battle for victory. At the chequered flag, just 1.75 seconds separated the first four. Victory went to Ronny Scheer from Dresden with a Ford Sierra RS500 Cosworth while the battle for second was only decided at the finish line. With a margin of just one hundredth of a second, Marc Hessel from Bonn, runner-up in the 1987 DTM, was able to claim second from his Danish fellow BMW driver Kris Nissen. Driving another BMW, Leonard Batenburg (NLD) finished fourth.

With his victory, Ronny Scheer also delivered a home win for BWT Mücke Motorsport. The team from Berlin not only prepares the “Cossie”, a right-hand driven, ex-title-winning car from the British Touring Car Championship, but also the legendary Opel Calibra V6 4×4 raced by ex-Formula 1 driver Keke Rosberg in the 1995 DTM. The Calibra, over 500 hp strong, turned out to be the undisputed crowd’s favourite with Stefan Mücke behind the wheel in the Saturday race, but with victory in sight, a technical problem was the reason for Mücke’s retirement with two laps remaining. While the Calibra didn’t race on Sunday, Scheer, Nissen, Hessel and the others provided great entertainment with spirited racing for the spectators in the nicely filled grandstands.

At the start, Saturday race winner Yannik Trautwein initially took the lead with the BMW E36 STW run by Schnitzer Classic, but only just ahead of teammate Nissen with the BMW E30 M3. Although having started from the third row, Scheer already joined the leading duo with the powerful Ford on the back stretch. After a brief safety car intervention, this trio continued to dominate proceedings at the front. Then, Nissen shot past Trautwein with superior speed, the latter eventually retired. Nissen, successful in DTM with BMW, Alfa Romeo and ABT-Audi, used all his skills to beat Scheer, but the Ford pulled away over and over again on the straights. From behind, Hessel and Batenburg came closer and converted the duel into a four-way battle. Nissen briefly nudged the Ford’s rear once, but Scheer remained in control of the car. Eventually, Nissen made a final attempt just before the finish, but as the Ford ran slightly sideways, the Dane briefly lost momentum, a situation from which Hessel benefit to just beat Nissen for second place.

Following the successful debut at Lausitz, the DTM Classic Cup will have its second cameo at the long-standing Norisring (1 till 3 July). Prior to that, the new DTM Classic DRM Cup with legendary cars from the Deutsche Rennsport-Meisterschaft in the 1970s will be making its debut during the third round of the DTM season at Imola in Italy from 17 till 19 June.