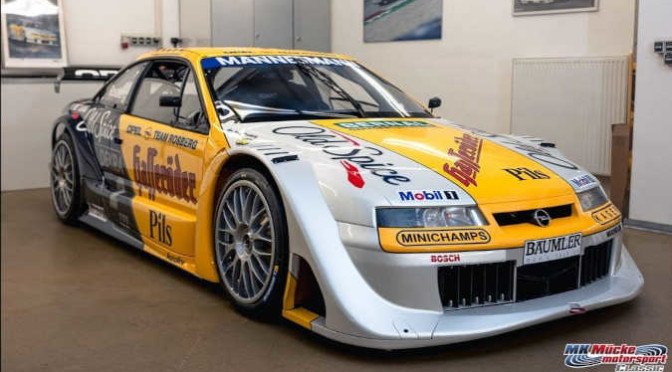 A surprising debut: the Opel Calibra V6 4×4, in which ex-Formula 1 world champion Keke Rosberg drove his final race in DTM in 1995, returns to the track. Mücke Motorsport Classic is running the legendary race car for the first time during the DTM Classic Cup season opener at Lausitzring Turn 1 powered by Autohero this weekend (20-22 May). In the two races on Saturday and Sunday, ex-DTM driver Stefan Mücke from Berlin and Ronny Scheer from Dresden will be racing the ex-Rosberg Calibra.

The Opel Calibra made its mark on the era of the Class 1 touring cars from 1993 till 1996. Although initially slowed down by technical issues during its competition debut in the 1993 season finale at Hockenheim, the coupé was very popular, especially among the Opel fans that came to the race tracks in large numbers. Not in the least with the support of Formula 1 experienced companies Williams (hydraulics) and Cosworth (engine), the Calibra became a race-winning car. In the process, the race car from Rüsselsheim not only stood out for its characteristic looks, but also for a 2.5 litre V6 engine, delivering over 500 hp and revving up to 12,000 rpm, developing a brutal sound that excites the fans to this day.

Keke Rosberg, the 1982 Formula 1 world champion with Williams, already was behind the wheel during the Calibra’s competition debut, initially with Opel Team Joest and from 1995 in his newly founded Team Rosberg. His teammate Klaus Ludwig gave the Opel fans reason to cheer with a pair of wins during the season finale at Hockenheim on 16 October 1995, and even more so as Manuel Reuter and Uwe Alzen made it a 1-2 in both races. With their white and yellow flags, the fans created a really special atmosphere in the Motodrom. The celebrations also included Keijo Erik “Keke” Rosberg, who was given a passionate send-off at his farewell.

Today, the Rosberg name is still a fixed element in DTM. For instance, René Rast (GER) became DTM champion with Audi Sport Team Rosberg three times in 2017, 2019 and 2020. In the season opener of the 2022 DTM at Portimão, Team Rosberg celebrated another DTM race win with Nico Müller (SUI) behind the wheel of the Audi R8.

The ex-Rosberg Calibra was comprehensively prepared by Mücke Motorsport Classic and laid out in the livery of the 1995 season since January 2022. During the debut of the DTM Classic Cup with touring cars from the years between 1984 and 2007, Stefan Mücke, who competed in 61 DTM races between 2002 and 2006, and Ronny Scheer, will be alternating in the four-wheel driven Calibra and a Ford Sierra RS 500 Cosworth from the 1990 British Touring Car Championship. “In one race, I will drive the Ford and Ronny the Opel, and the other way round in the second race,” Stefan Mücke says.

For Mücke Motorsport, based in Berlin-Altglienicke, the race weekend at the track located south of Berlin is a home round, but also a demanding large-scale operation. After all, the team, with popular principal Peter Mücke at the helm, is the only outfit involved in all three DTM series, running a total of five race cars. Next to DTM Classic, Mercedes-AMG Team Mücke Motorsport is competing in the top league DTM with Maximilian Buhk (GER). Moreover, BWT Mücke Motorsport is running two Mercedes-AMGs for Frenchman Edouard Cauhaupé and Rodrigo Dias Almeida from Mozambique in the talent pool DTM Trophy.

The DTM Classic Cup races are broadcast live at ServusTV On (servusTV.com), ServusTV’s video and streaming platform, as well as DTM Grid (grid.dtm.com). At Lausitzring, the Classic races start at 5pm on Saturday and Sunday. Tickets for “DTM Lausitzring Turn 1 powered by Autohero” are available from +49 1806 991166, tickets.dtm.com and for the first time also eBay.de.