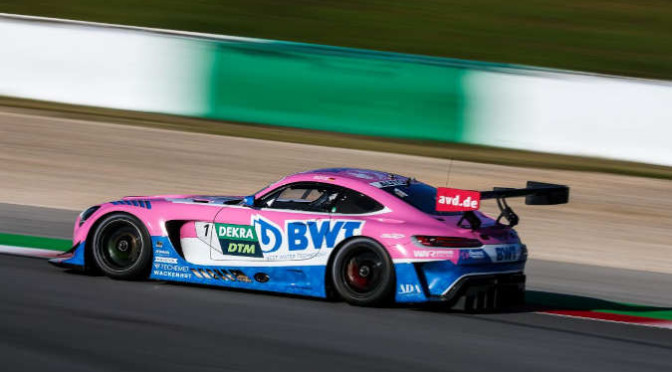 The focus is on rally superstar Sébastien Loeb during the DTM season opener at Portimão in Portugal. All the DTM drivers are looking at the nine-time rally world champion with huge respect. It was defending DTM champion Maximilian Götz who gave the Frenchman the decisive advice: “I spoke with him this morning and I told him he should simply stay on the asphalt,” as Götz (Mercedes-AMG Team WINWARD Racing) said, tongue-in-cheek, and adds: “For me, Loeb is an undisputed hero, he is at the same level as Michael Schumacher and Valentino Rossi. Being up against such a star is great.” Loeb will be making his debut in the first two races of the season on Saturday and Sunday (race start at 1.30pm CEST on both days, live on ProSieben from 12.30pm on Saturday and 1pm CEST on Sunday) with the Ferrari 488 run by the Red Bull AlphaTauri AF Corse team. “He is one of the world’s most talented and most all-round racing drivers. He doesn’t have to prove anything to anyone and it is remarkable that he is taking on this difficult task,” Thomas Preining (Porsche 911, KÜS Team Bernhard) added during the official DTM press conference on Wednesday.

Drivers are awaiting the season opener with excitement, but also with considerable respect for the impressive field with 29 race cars and drivers from 15 nations. “I know what it feels like to become DTM champion, therefore I would be happy to repeat this great feeling, even more so as back-to-back champions in DTM are quite rare. I would put my money on anyone,” Götz said, underlining the common opinion that the field is not only very strong, but also well-balanced. Thomas Preining, Philipp Eng (BMW M4, Schubert Motorsport) and Marius Zug (Audi R8, Atempto Racing) didn’t want to name a title favourite either, even though, eventually, Eng put his own name forward, albeit with his tongue slightly in cheek as well. The only woman in the DTM field, meanwhile, showed courage. Esmee (Lamborghini Huracán, T3 Motorsport) did come up with a clear prediction: “I pick my teammate Nicki Thiim!” The Brit, who wants to learn a lot from the son of 1986 DTM champion Kurt Thiim, would like to see more women racing in DTM, but also knows how difficult it is to succeed: “Last year, I wanted to score my first points and I managed to do so. But with the strength of this year’s field, it will be more difficult to finish in the points,” she is well aware of the difficulty of the task at hand.

Meanwhile, Scot Elkins, the new race director in DTM, has already made a remarkable impression on the drivers. “I already know Scot Elkins from Formula E. He is somebody who gives clear instructions, so exactly what one would expect from a race director,” as Philipp Eng, one of four Austrians in DTM, reports. “Every driver is looking up to him with respect. Getting him on board was a good decision.” And Götz added: “In the first drivers’ briefing with him, you already noticed that everybody was actually listening.” Likewise, Thomas Preining is expecting clear, understandable decisions from the American.

All drivers appreciated the fact that running continued into the darkness during the second official DTM test on Tuesday and Wednesday. “Driving into the sunset is always cool,” Eng said. “A night race at Norisring would be cool, I would be really happy with that,” Preining said. “That would be really spectacular, at the race track and also with a big party for the fans in the paddock,” Götz already imagined, and Marius Zug agreed: “A great idea!” The Formula 1 circuit of Portimão on the Algarve coast is also popular among the drivers. “It is a real roller-coaster and getting a perfect lap together is very difficult,” Preining had to admit. “I like the track,” Zug briefly summed up. “A good addition to the DTM calendar. I am certain that we will get to see great racing at this track,” Eng is convinced.

“For me, a childhood dream is coming true. DTM has always been my goal,” said Marius Zug, the youngest driver in the field at 19, who appreciated the “ultimate competition” in particular. Preining, like Zug a newcomer in the long-standing series, mentions the “dream of DTM” that is now coming true for him as well. “DTM simply is something special.” Eng, who spent one year racing in other series, put it straight: “When you are racing in DTM, everybody knows what you are talking about. I am absolutely happy to be back in DTM.” Reigning DTM champion Maximilian Götz underlined: “The best drivers are racing in DTM. It is looking really promising for the new season as everyone can win. I am certain that it will be a battle until the finale, until the final lap.” A battle that starts at Portimão this weekend and anticipation is huge for everyone involved.