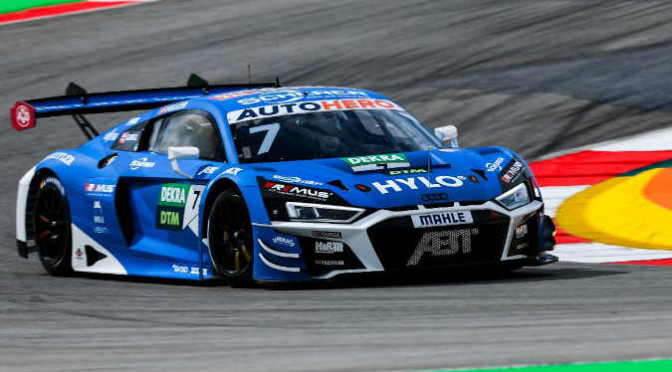 Audi ahead of Porsche: that was the order at the end of the first DTM test day just before the season opener at Portimão. Swiss Ricardo Feller ended up fastest in the Team ABT Sportsline Audi R8 with a time of 1m 41.573s ahead of Austrian Thomas Preining (1m 41.658s) with the Porsche 911 from KÜS Team Bernhard. With 21-year-old Feller, a DTM newcomer posted the fastest lap time, just like in the first official DTM test in early April. At Hockenheim, it had been German Marius Zug, the youngest driver in the field at 19, who confirmed his performance with the third-fastest time at Portimão on Tuesday with the Attempto Racing Audi. The 29 drivers from the record field of the 2022 DTM will continue the second official test on Wednesday afternoon. The first two of this season’s 16 races will be held at the 4.653 kilometres long track on the Algarve on Saturday and Sunday (race start 1.30pm CEST on both days). In the German-speaking region, ProSieben is broadcasting the races live, on Saturday from 12.30pm and on Sunday from 1pm CEST.

“Of course, being fastest is a nice feeling, but I don’t want to be the fastest in testing, I want to do so in qualifying,” DTM rookie Feller said after testing had ended on Tuesday evening. “Anyway, it is mega cool in DTM. Professionalism is extreme, the level is unbelievably high.” Thomas Preining, one of four Austrians in DTM, was also visibly satisfied. “We worked through our programme very well. For today, I am happy with the performance, but we will probably only see where we really are in first qualifying on Saturday,” Preining said. “As expected, everything is super close,” his team principal, former endurance world champion and Le Mans winner Timo Bernhard said.

Four of the six brands competing in this year’s DTM were among the first seven places on the first test day, next to Audi and Porsche also BMW and Lamborghini. The fastest with the new BMW M4 was South African Sheldon van der Linde (Schubert Motorsport, 1m 41.919s) in fifth, the fastest from the six Lamborghini drivers was newcomer Nicki Thiim (T3 Motorsport, 1m 41.940s) in seventh. “The team only picked up the new car in Italy on Thursday, so we first had to run in and adapt the new car a bit,” a cheerful Nicki Thiim, the son of DTM legend and 1986 champion Kurt Thiim reported. “It is a privilege what I am doing here. I really appreciate it. I am living my dream,” the Dane underlined the significance his profession and DTM have for him.

Mercedes-AMG, the most successful brand of the previous year, apparently still kept a low profile at the start of testing. Fastest driver was German Luca Stolz from the HRT team who ended up in 14th place with a time of 1m 42.167s. One place further down was Brazilian Felipe Fraga (1m 42.172s) with the Ferrari 488 from the Red Bull AlphaTauri AF Corse team. Driver of the second Ferrari on Tuesday was regular driver Nick Cassidy (NZL), who will hand over the car to nine-time rally world champion Sébastien Loeb on Wednesday. The Frenchman will be making his DTM debut this weekend.

Ben Green mixed with the impressive drivers’ field. The 23-year-old Brit had won the title in DTM Trophy, the talent pool on the DTM platform, in the past season. As a reward, Green got to take part in a DTM test. In the Mercedes-AMG of championship-winning team HRT, Ben Green did a good job straight away. “I enjoyed every lap. The HRT team supported me really well to get acquainted with the Mercedes-AMG and the new track. Following a technical issue, we had to stop a bit earlier than planned. Now, I am looking forward to Wednesday when I will be able to attack with new tyres,” Ben Green said. “DTM is my undisputed goal and I think that I am getting a bit closer to that goal here in Portimão.”