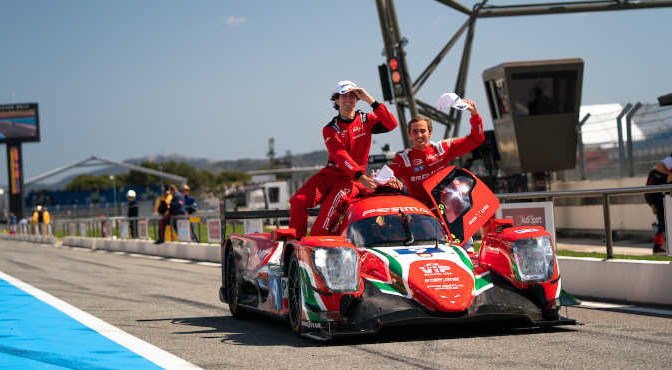 Lining up for the opening round of the European Le Mans Series at Circuit Paul Ricard, PREMA delivered a sensational victory in the 4 Hours of Le Castellet. Lorenzo Colombo, Ferdinand Habsburg, and Louis Delétraz put up a scintillating performance to hand the team its maiden Endurance racing win.

Drafted earlier this week to replace injured Juan Manuel Correa, Colombo took off P3 on the grid to make his maiden rolling start. The Italian held onto P3 during the first stint, navigating several neutralisations and safety-car situations. During the first round of pit stops, he gained one spot to P2. With another consistent run, he later handed the #9 Oreca 07 LMP2 racecar to Habsburg in a great position.

The Austrian moved up to P1 during the driver-change stops and quickly opened a massive gap with a spectacular drive. Close contact and traffic regrouped the pack, but Habsburg defended well from the bold attack carried by his closest competitor, regaining valuable ground before the final driver change.

Delétraz, who had qualified the car on Saturday, jumped in for the final segment with little more than one hour to go. Coming back on track behind a contender who was on a different strategy, the Swissman put together an aggressive move at Signes to retake P1, maximizing his performance and even setting the fastest lap of the race in the process.

In the final stint, a late-stopping car briefly got in front, but Delétraz kept pushing, aware that strategy would play out. In the end, he eventually crossed the finish line with over 10 seconds of margin.

For the PREMA team it was the first endurance racing win, only in its second start after the 1000 Miles of Sebring WEC event.

“Amazing debut for the whole team and me as well. It’s been an incredible race from the start and I didn’t expect to have so many full course yellows and safety cars. It was also my first rolling start coming from single-seaters. I just tried to manage my tyres and fuel in the best possible way with advice from the team. Then we jumped from P3 to P1 with Ferdinand and we kept our position after that. We created great chemistry between teammates and when everything is fine behind the scenes, you get this kind of results.”

“There was quite some pressure for me and the team when I got into the car due to the close competition, but we made no mistakes. After the pit-stop, I knew that the car in front had to come in, but I had the Panis Racing one quite close. I had to pass, so I saw an opportunity and went for it. Throughout the race, we had to take great care of the front left tyres, but we managed them well. In the end, the car was quick and we could pull a gap to be a bit more comfortable. It always looks easy from the outside, never from the inside, but we had a really strong weekend. I’m very proud of the team, as they have been working night and day on this program for the last three months. It is a great day for all of us and a big thank you goes to everyone involved and my two teammates.”

“Being part of the first win for PREMA in P2 makes me very happy. Years ago, I dreamt to race for this team, and now we won on our debut. Of course, Louis and I had quite a few races together. We battled a lot and pushed each other to the next level, while Lorenzo is such a great guy, made no mistakes. Now we head for the home race in Imola with high hopes and a good feeling. Some consistency now will give us a good chance for the rest of the season to come.”