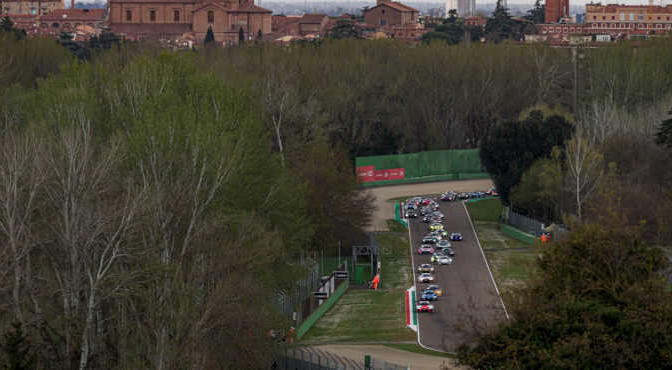 The #32 machine started from pole and led much of the three-hour contest, only surrendering its advantage during the opening stint when starting driver Charles Weerts made a mistake that allowed fellow Audi runner Chris Mies to seize top spot.

But they were back out front for the middle phase of the race with Kelvin van der Linde and never looked like being caught, particularly when Dries Vanthoor climbed aboard for the final hour. Overall victory for the Belgian squad was complemented by its #30 machine bagging Silver Cup honours, while Herberth Motorsport won the inaugural Gold Cup race with its Porsche and SPS Automotive Performance earned Pro-Am honours for Mercedes-AMG.

Weerts took the start from pole and held his advantage into Tamburello, closely followed by Mies (#25 Saintéloc Junior Team Audi), Raffaele Marciello (#88 Mercedes-AMG Team Akkodis ASP) and Christopher Haase (#12 Tresor by Car Collection Audi). The race was soon neutralised following an incident that left the #112 JP Motorsport McLaren in the barriers and the #83 Iron Dames Ferrari stranded in the middle of the circuit, the latter sustaining significant front-end damage.

When racing resumed Weerts made another clean getaway, but shortly afterwards an unforced error saw the #32 Audi skate across the grass and allowed Mies to assume the lead. The #88 Mercedes-AMG remained third, while the #95 Beechdean AMR Aston Martin moved into fourth spot after Nicki Thiim completed a door-banging move on Haase into Tamburello.

The race was back behind the safety car on the 40-minute mark to remove the stranded #77 Barwell Motorsport Lamborghini from the gravel. When the green flag flew Thiim was the main focus of attention as he harried Marciello for third place. The Mercedes-AMG ace held firm, however, and as the hour-mark approached began to edge away from the Aston.

When the pit window opened Team WRT and Beechdean AMR made the crucial decision to stop a lap earlier than both Saintéloc and Akkodis ASP. The undercut proved successful, allowing Kelvin van der Linde to assume the lead at the wheel of the #32 Audi. Lucas Légeret ran second in the #25 Saintéloc car, while the Beechdean Aston of Marco Sørensen jumped ahead of the Akkodis ASP entry, which was now driven by Dani Juncadella.

The #25 Audi was initially able to keep the #95 Aston Martin at bay, allowing Van der Linde to build a healthy lead of more than eight-seconds at the head of the field. Ultimately Légeret’s defence would prove to be in vain when he ran wide at Tamburello, dropping the Saintéloc driver down to 14th spot and out of contention.

Van der Linde’s lead was then eliminated by another safety car, this one caused by both the #97 Aston Martin and the #27 Lamborghini coming to a stop on-track. This was resolved quickly, but just as the race was about to resume the #107 CMR Bentley slammed into the rear of the restarted #27 Lamborghini, necessitating a lengthier clear-up.

Vanthoor was not under serious pressure from Gounon, who in turn had the pace to stay clear of Stolz. The #32 Team WRT Audi was therefore able to seal a momentous debut win for the Ingolstadt marque’s new model. It also represented the ninth overall Endurance Cup victory for Audi machinery, more than any more brand, while WRT bagged its first win since triumphing at Imola in 2020.

While the top two places did not appear to be in doubt there was a battle for third spot during the closing stages as Mattia Drudi (#12 Tresor by Car Collection Audi) did his best to pass Stolz for the final step on the podium. The German driver was canny enough to keep the Audi at bay, ensuring a fine start to the season in the car he shares with Maro Engel and Steijn Schothorst.

The #12 Audi was a fine fourth on debut followed by another impressive newcomer, the #111 JP Motorsport McLaren. The car was rarely seen during the race, a testament to the calm, consistent performance from Christian Klien, Vince Abril and Dennis Lind. The #54 Dinamic Motorsport Porsche took sixth, followed by the #51 and #71 Ferrari entries from Iron Lynx. The recovering #25 Saintéloc Audi and the #38 JOTA McLaren completed the top-10.

Silver Cup victory went to Team WRT after a late change at the front of the order. The #99 Attempto Racing Audi had dominated, only to be caught out during the final round of pit stops. This allowed the #30 crew of Thomas Neubauer, Benji Goethe and Jean-Baptise Simmenauer to clinch class honours, while the Attempto crew recovered to second spot. Garage 59 completed the Silver Cup podium with its #159 McLaren.

The very first Gold Cup race was won by Herberth Motorsport courtesy of a late pass by closing driver Robert Renauer, ensuring victory alongside brother Alfred and Ralf Bohn. They edged the #21 AF Corse Ferrari by just a few seconds after a competitive maiden contest for the new category. HRT completed the podium with its #5 Mercedes-AMG.

In Pro-Am, SPS Automotive Performance emerged on top from a three-way battle for class honours. The crew of Valentin Pierburg, Ian Loggie and Dominik Baumann beat the #52 AF Corse Ferrari, which made an impressive recovery after being caught up in the opening lap drama. Garage 59 was next, earning a second class podium of the day thanks to its #188 McLaren.

The event was also noteworthy for a significant spectator presence, many of whom travelled to Imola to see Valentino Rossi make his full-time switch to GT racing with Team WRT. The #46 Audi ran on the fringes of the top-10 during the opening stint and remained there when Rossi took over for the second hour, but ultimately lost out by stopping a lap too late. Fred Vervisch handled the final phase and recovered several positions to finish 17th.

Despite the result, Rossi’s presence was keenly felt throughout the Imola weekend, with his colours displayed by passionate fans around the Italian venue. Indeed, despite continuing Covid restrictions, some 20,000 people were in attendance for the season-opener weekend.

A major crowd is also expected for the next stop on the Fanatec GT World Challenge Europe Powered by AWS tour, which sees the Sprint Cup campaign launch with a pair of 60-minute contests at Brands Hatch. The British venue will stage an action-packed two-day event on 30 April/1 May, shifting the season up another gear following this weekend’s opening encounter.

Dries Vanthoor, #32 Team WRT Audi: “What a great race, starting from pole and finishing first. Like Kelvin said, yesterday we were wondering where we were, but today the car was a weapon. Great job by WRT and by Audi for giving us a car to fight here. It’s a good start to the season, but there’s a long was to go and a lot of work to do.”

Jules Gounon, #88 Mercedes-AMG Team Akkodis ASP: “I was pushing like hell and dropping like a stone, so it was quite difficult. But well done to [Team WRT], they did a great race with no issues. I think our car was fantastic; we really pushed the limit and the team has worked so hard over the winter to gain a few more tenths. We did, but it wasn’t enough so we will keep working. I am just happy to be back and next time we will get them harder.”

Luca Stolz, #2 Mercedes-AMG Team GetSpeed: “It was really tough to fight against Mattia [Drudi] but it was really fair. I pushed a lot and in the end it was a podium for us. The team did a great job. It was really nice to stop on a safety car and gain some positions, so it’s a perfect to start the season.”