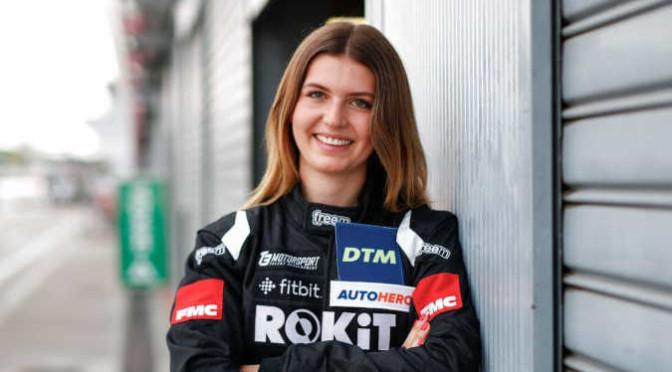 British racing driver Esmee Hawkey will be competing in DTM in 2022 as well. Like last year, the 23-year-old will be participating in the 16 sprint races with a Lamborghini Huracán GT3 Evo run by T3 Motorsport. Following the first official test days at Hockenheim in early April, the DTM will get its 36th season underway at Portimão in Portugal from 29 April until 1 May. Tickets for all the races are available at dtm.com/tickets and from the hotline +49 1806 99 11 66.

“In 2021, I loved every second, my first year in GT3 machinery and my first time racing at many international race tracks. I have learned a great deal with the T3 Motorsport team,” Esmee Hawkey is looking back in a positive way. “Therefore, I am overjoyed to be returning to DTM this year.” In her debut season, she was already able to establish herself in DTM and kept renowned rivals at bay on several occasions. In the race at Assen in The Netherlands, Hawkey, the winner of the Pro-Am title in the 2020 British Porsche Carrera Cup, scored her first DTM points.

“We are really happy that we can continue our involvement with Esmee. She absolutely convinced us in the past season and is a real asset to our team and also to DTM in every way,” T3 team principal Jens Feucht says. “We are particularly happy to be part of DTM again, a series that we have come to appreciate as a worldwide unique race series. Therefore, we wil be working hard to turn the entry of a second Lamborghini into reality as well.”

Currently, Hawkey, who by her own account is also “quarter Dutch and quarter Austrian”, is the only female driver in the high-class field of the 2022 DTM. “In her first season in DTM, Esmee has already shown the talent she has inside. I am certain that she will achieve even better results this year. She is a real asset to the field of the 2022 DTM,” Frederic Elsner, director event & operations of the DTM organisation ITR is convinced.