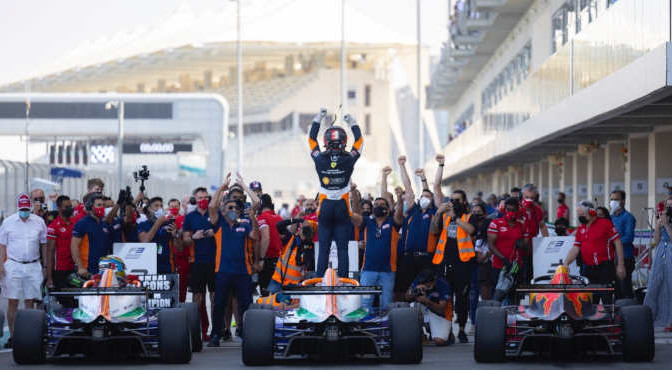 Running in collaboration with PREMA Racing, Mumbai Falcons Racing Limited wrapped up a scintillating Formula Regional Asian Championship season this weekend at Abu Dhabi, home to the 2022 series finale. Arthur Leclerc powered to a masterful win in Race 1 to mathematically clinch the driver title. The 21-year-old Monegasque scored his fourth win of the year. Including the victories secured by Dino Beganovic and Sebastian Montoya, and Ollie Bearman’s maiden Formula Regional podium, Mumbai Falcons posted a grand total of seven wins, 18 podium finishes, four pole positions, and five fastest laps. Abu Dhabi Racing by PREMA also experienced a fair share of success, with six podium finishes overall by Paul Aron and Jak Crawford. The list of achievements includes a brilliant run in the Masters Cup featuring Khaled Al Qubaisi. The Emirati racer amassed eight class wins to bring home the championship in style, while his two daughters, Amna and Hamda Al Qubaisi delivered promising performances on track during the five-week series. PREMA Racing will now refocus on the 2022 Formula Regional European Championship by Alpine, which will start in late April at Monza. Arthur Leclerc – 2022 Formula Regional Asian Champion “I’m extremely happy to have won the championship in great fashion. We had the chance to show our real pace, and that’s the result of all the work we did together throughout the season. We are looking forward to taking this experience to be ready for the FIA Formula 3 Championship.” Khaled Al Qubaisi – 2022 Formula Regional Asian Masters Cup winner “It has been a great season, I enjoyed it tremendously and had fun racing with my daughters. I look forward to the next season. I want to thank Abu Dhabi Racing and PREMA for the amazing effort!”