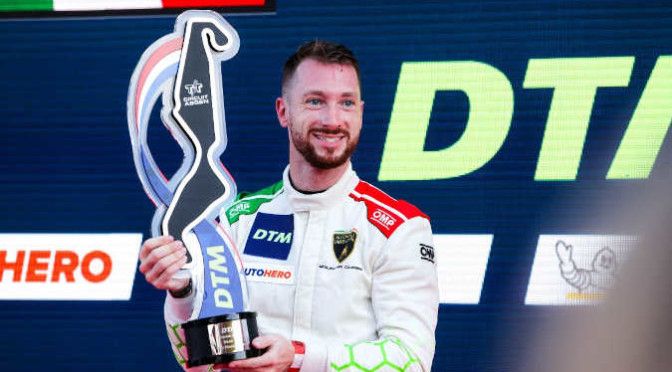 Lamborghini works driver Mirko Bortolotti is the spearhead in the drivers’ quartet of the Grasser Racing Teams for the 2022 DTM. Next to the Italian, Swiss Rolf Ineichen, Austrian Clemens Schmid and Italian Alessio Deledda are the drivers of the four Lamborghini Huracán GT3 Evos. The GRT team, based in Knittelfeld in Austria, is taking on its maiden season in DTM, getting underway from 29 April until 1 May in Portimão in Portugal and consisting 16 sprint races.

“DTM is a very popular and prestigious championship. The best car brands, high-quality teams and very strong drivers are up against each other,” says Giorgio Sanna, head of Lamborghini Motorsport, about the involvement of the Italian sports car brand. “It will be an exciting year for our team and I am very proud of having Mirko and Rolf on board. They have been mainstays in our team for many years and played a crucial role in some of our biggest achievements,” team principal Gottfried Grasser is looking ahead to the new challenge.

Benedikt Böhme, managing director of the DTM organisation ITR: “We really appreciate the maximum commitment of Lamborghini. With Mirko Bortolotti, the manufacturer is providing an outstanding driver and in DTM, he will be meeting his peers.”

Mirko Bortolotti, an ex-Formula 2 champion and former Formula 1 test driver, has been racing for GRT since 2015 and has racked up 17 wins, 21 pole positions and 35 podium finishes since. With GRT, the 32-year-old also won the endurance racing classics at Daytona and Sebring and the Blancpain GT Series title. Bortolotti already has initial DTM experience following a guest start at Assen last season where he convinced straight away with second place and the fastest race lap. “I can hardly wait to be racing with GRT in DTM this year. Driving the Lamborghini in this legendary championship will be a privilege,” says Bortolotti, who was signed by Lamborghini Squadra Corse seven years ago.

Like Bortolotti, Rolf Ineichen was also involved in GRT’s three wins at Daytona and Sebring. On top of that, his track record includes five wins in ADAC GT Masters and GT World Challenge. The 43-year-old, holding ‘silver’ status in the FIA driver ranking, has established himself as a regular driver at GRT with a wealth of experience in the Lamborghini since 2016. “I have been fascinated by DTM for many years,” Ineichen says. “At GRT, I have learned a great deal in the past years and I feel ready for taking on a new and exciting adventure in DTM.

Alessio Deledda started his career on two wheels in 2017 prior to graduating to Formula 2 through the ranks of Formula 4 and Formula 3. Now, the 27-year-old is making the switch to GT racing and will be in action for GRT in DTM as an official Lamborghini Squadra Corse junior driver. “After my experience in Formula 2, I consider DTM as the perfect environment to continue my development as a racing driver,” Deledda explains. “I feel honoured to be part of this GRT team and this manufacturer and to be working with Mirko Bortolotti, whom I admire very much as a driver.”

Back in December, GRT team principal Gottfried Grasser had already announced his fellow Austrian Clemens Schmid as the first driver of his DTM quartet and he is confident that the 31-year-old Tyrolean, who already has ten years of GT3 experience and has been racing for GRT since 2020, is capable of making “an unbelievable step”. Grasser adds: “I think that the DTM concept will suit him as a driver very much.” Meanwhile, Schmid is happy: “Being able to race in DTM together with an Austrian team is making it even more special.”

Ex-DTM/ITC-champion and two-time DTM runner-up Manuel Reuter, who took on the capacity of team manager and sporting director at Grasser Racing Team in January, is convinced: “Our line-up is providing a perfect set-up for our maiden season in DTM. With Mirko, we have an undisputed race winner and a first-class team leader. He is a fantastic benchmark from which the other drivers will benefit.”

“Our anticipation for the new DTM season grows with every passing day. The quality of the drivers and teams promises exciting, close duels for every race,” says Frederic Elsner, Director Event & Operations of the DTM organisation ITR. “Team principal Gottfried Grasser built a top team: With Manuel Reuter as team manager and sporting director and the driver quartet around Mirko Bortolotti. He is one of the world’s best GT racers.”