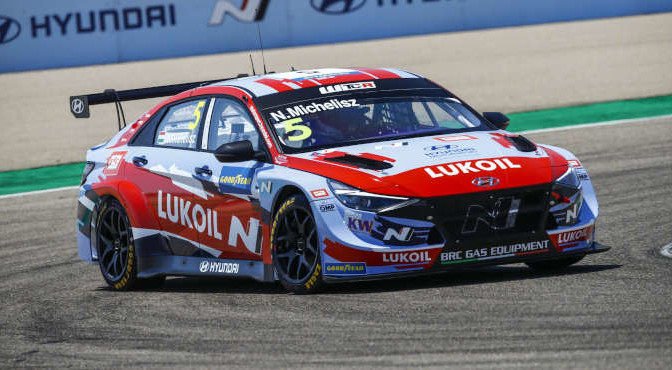 Hyundai Motorsport Customer Racing has underlined its commitment to the WTCR − FIA World Touring Car Cup with a refreshed line-up of supported drivers for the eagerly anticipated 2022 season, its fifth as a WTCR customer racing brand.

While Norbert Michelisz, the 2019 King of WTCR, has raced with Hyundai power since the series began in 2018, Mikel Azcona is a talented new recruit for the upcoming campaign but with big wheel tracks to follow.

And although the Hyundai Elantra N TCR is all-new for Azcona, the 25-year-old ace will get the opportunity to test extensively before the planned 2022 WTCR season opener at Autodrom Most in Czech Republic from April 9-10 when Michelisz will be on hand to pass on his extensive experience.

“I’m extremely happy and proud to join Hyundai Motorsport Customer Racing for the upcoming season as a driver in WTCR − FIA World Touring Car Cup,” said Azcona, who has three WTCR wins and 12 podiums to his name. “It’s another great, positive step on my career and, of course, this wouldn’t have been possible without the big support from my family.”

A double TCR Europe title winner, Azcona added: “Hyundai is a reference for manufacturers, with such a big potential in [the] automotive world, especially in motorsports and TCR racing where Hyundai cars have been at the top for many years. I can’t wait to start working with my new team-mate, everyone at the BRC Racing Team and to jump into the Elantra N TCR as well and do my best, as always. I’m convinced we can achieve great results together.”

“Success in WTCR − FIA World Touring Car Cup competition has always been a major aim of our Customer Racing department and our TCR project. 2022 is no different,” Moncet said. “Replacing Gabriele Tarquini, and his wealth of experience, was a tough task, but with Mikel Azcona I believe we have the right driver. He’s become one of the stars of TCR racing, and as a Hyundai Motorsport Customer Racing Driver he can take the next step in his career.

“We know the strength of the team, the capabilities of Norbert Michelisz, and performance of the car but after four years we all know how competitive WTCR can be, so we never take anything for granted. Because of this there is extensive testing planned before the first round, to make sure that both drivers can take advantage of every opportunity during the season.”

New WTCR team-mate brings added excitement, says Michelisz
Norbert Michelisz, the Hungarian hero and 2019 King of WTCR, has said joining forces with Mikel Azcona to fly the Hyundai flag in the WTCR − FIA World Touring Car Cup will make the build-up to the new season even more exciting, adding that his new team-mate is “one of the best drivers”.

Michelisz is starting his fifth season as a Hyundai-supported BRC Racing Team driver and does so having won seven WTCR races and claimed 18 podiums along with the coveted King of WTCR in 2019.

“I am very happy and honoured to confirm a drive in WTCR − FIA World Touring Car Cup with the Elantra N TCR and the BRC Racing Team,” said the 37-year-old. “Every season preparation and start is exciting, but it’s even more so this year having Mikel as my team-mate, since he is probably one of the best drivers out there. I have followed his career and enjoyed every fight on track we had since his arrival in WTCR, and really look forward to working with him.

“We know the Elantra N TCR is a race-winning car, and we now have an extra season of experience with the chassis to put to use. I expect another very competitive and hard fought year with a lot of battles. My target is to be competitive from the first moment and add to the successes the team and I have already had in WTCR.”