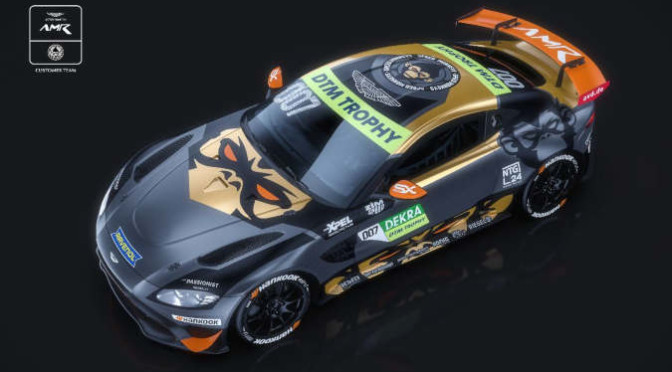 The Speed Monkeys team is entering the DTM Trophy with Aston Martin. The plan is to run a pair of Aston Martin Vantages while the first seat has already been taken by Nick Hancke. With his début in the talent pool that is the DTM Trophy, the 22-year-old from Erlangen is continuing his still young career on the high-quality DTM platform. Last season, Hancke ended up third overall in the BMW M2 Cup, also part of the DTM support package.

“The DTM Trophy enables young talents in particular to showcase their performance in an unfiltered way as in the junior series, just like in the famous DTM, one driver is driving a car, rather than two drivers sharing the cockpit. I really appreciate this format,” says Speed Monkeys team principal Christian Bracke. “Moreover, the DTM environment is unique. DTM is a very famous brand. Everybody immediately knows what you are talking about when you mention DTM. After three years with Porsche, the team is making the switch to Aston Martin for the 2022 season. The team and Nick Hancke participated in test drives organised by Aston Martin Racing (AMR) at Valencia in Spain in mid-January. “Nick was able to give very good feedback about the new car right away,” Bracke reports. “In the M2 Cup, he has already shown that he is able to be a frontrunner. We have high goals and are aiming at a position among the best three in DTM Trophy.”

Born in Aachen, Nick Hancke already started racing touring cars in 2016. In 2021, he not only ended up third in the new BMW M2 Cup, although he even had to miss one race weekend but also scored a class win in the Nürburgring 24-hour race in the team owned by football star Max Kruse and sealed the DMV BMW Challenge title. “I am very much looking forward to taking on the 2022 season in the DTM Trophy as a member of the Speed Monkey with such an extraordinary car,” Nick Hanke says. “After some experience in touring car racing, entering DTM Trophy is the start of a new chapter.”

Ex-DTM champion Martin Tomczyk, who has taken over the series’ management of the DTM Trophy within the DTM organisation ITR, is delighted about the new addition: “The Speed Monkeys team is a real asset for the DTM Trophy, not just because it is running the traditional British Aston Martin brand. It is rather Nick Hancke’s graduation from the successful BMW one-make series to our talent pool DTM Trophy that underlines the significance of the DTM platform. For young drivers, this is the linear road into DTM as the top league.”