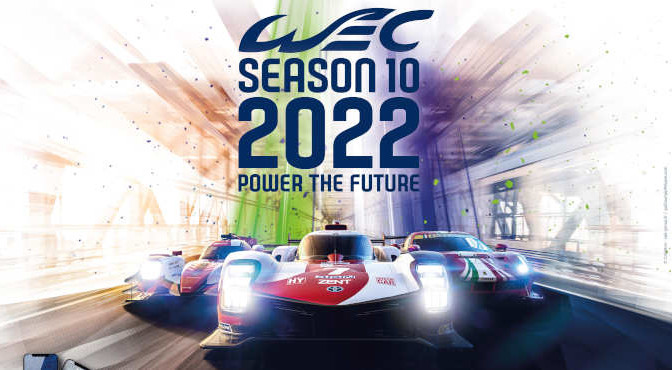 In what will be the FIA WEC’s tenth anniversary year, the world’s premier international sportscar championship continues to go from strength to strength.

The introduction of the Hypercar category last season has seen an influx of manufacturers commit to the WEC with Peugeot set to join Toyota, Alpine and Glickenhaus on the grid in 2022. Audi, Porsche and Ferrari plus others will follow in the very near future.

Until then, the 2022 entry list looks extremely promising with strong manufacturer representation, world-class teams and an impressive line-up of drivers from various motorsport disciplines.
The WEC will also adopt a renewable fuel for 2022: TotalEnergies’ Excellium Racing 100. This will allow for greenhouse gas (GHG) emissions savings of at least 65% compared with traditional fossil fuels.

The quality and diversity of entries across all four categories will provide non-stop action throughout the six-round season which will visit North America, Europe, Middle East and Asia.

• Alpine ELF Team to return to WEC’s top-tier category with its non-Hybrid LMP1 (Alpine A480 Gibson), using 2022 as further preparation for its LMDh campaign in 2024

• The likes of Audi, Ferrari and Porsche will continue with respective development programmes for Hypercar throughout the 2022 season

• Largest ever LMP2 field in WEC history with a total of 15 entries (up from 11 in 2021) from nine different nations (Belgium, France, Great Britain, Italy, Poland, RAF, Slovakia, Switzerland and USA)

• British-based teams United Autosports and JOTA both enter two-car campaigns. Will Stevens replaces Anthony Davidson in the No. 38 JOTA car

• No. 83 LMGTE Am category winning AF Corse Ferrari transition from LMGTE Am to LMP2 with François Perrodo, Nicklas Nielsen and Alessio Rovera

• Spirit of Race (Ferrari) return to the category

• Popular Dane Nicki Thiim returns to the WEC with No. 98 Northwest AMR team alongside Paul Dalla Lana and David Pittard

Mohammed Ben Sulayem, FIA President: “The announcement of the FIA World Endurance Championship’s entry list is always an eagerly-anticipated moment. The championship continues to grow in strength and the 2022 entry list reflects this fact perfectly. The numbers are even better than last year, with top teams and world-class drivers represented across all four classes and contributing to the overall quality of the grid. In the meantime, the Hypercar category enters its second year, well-establishing as the championship’s top class and providing an excellent platform for the manufacturers. Exciting times lie ahead for the championship, both this season and in the years to come and this is something very encouraging.”

Pierre Fillon, President of the Automobile Club de l’Ouest: “The FIA World Endurance Championship has certainly come of age! To celebrate 10 years of the WEC, the starting grid boasts an unprecedented number of competitors. The stakes are high this year, and there are some key developments, both in sporting terms and in keeping with our CSR strategy. We are particularly proud, for example, to see the introduction of a 100% renewable biofuel, Excellium Racing 100, developed by our partner TotalEnergies. I’d like to wish all the competitors in the Hypercar, LMP2 and GTE classes an excellent season and I look forward to seeing them on 18 March for the 1000 Miles of Sebring.”

Frédéric Lequien, CEO of the FIA World Endurance Championship: “What better way to celebrate the WEC’s tenth anniversary than with a record-breaking number of cars on the grid. Not only do we have a strong and varied field in Hypercar and LMGTE Pro, we also see record numbers in LMP2 and LMGTE Am, which is testament to the continued growth of our championship. The future of the WEC is looking extremely bright and we’re looking forward to seeing everyone in Sebring for the start of what promises to be another memorable season.”

Classy Krütten in the ADAC GT