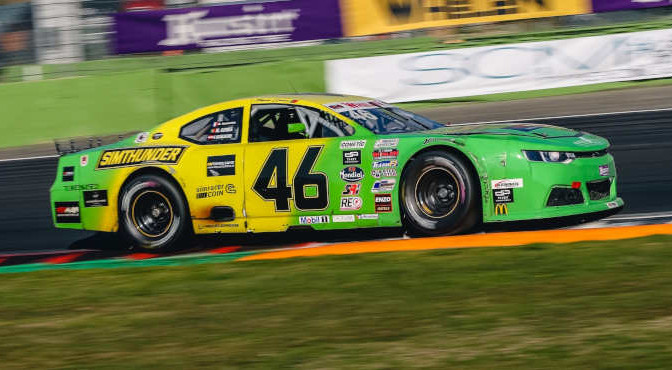 Miguel Gomes, who made an impressive debut on the #46 Marko Stipp Motorsport Camaro in 2021, will chase the Legend Trophy and look for improvements in the EuroNASCAR 2 overall standings in the 2022 NASCAR Whelen Euro Series season. After finishing third in the Legend Trophy and 15th in the point standings in last year’s campaign – as well as in third place in the Rookie Trophy – the 41-year-old will return to Marko Stipp Motorsport and is poised to leave a mark in EuroNASCAR’s championship dedicated to young talents and gentlemen drivers.

Having scored a second-place finish in the Legend Trophy at the 2021 finals in Vallelunga, Italy, Gomes wants to give his best to grab his first win in the special classification for drivers aged 40 and more and bring home the big trophy at the spectacular new home of the EuroNASCAR season finale: the Automotodrom Grobnik in Croatia.

Sofrićstudio Nascar Gpitaly Saturday2 533
Credits: Marko Stipp Motorsport / Klemen Sofric
Whilst going for it, the first-ever Portuguese full-time EuroNASCAR driver made the goal to step closer to the top-10 in the overall EuroNASCAR 2 standings. Gomes achieved his best career race result so far in last year’s second Most race with a strong ninth place finish.

“In my first season, my goal was above all to learn as much as I can and improve from race to race. I had raced on similar cars but on oval tracks, I had almost no experience on road courses. With the help of my team Marko Stipp Motorsport, and also my teammate Yevgen Sokolovskiy, I was able to grow and become more competitive from race to race,” Gomes stated.

“For my second season, I want to keep improving my road course racing skills and be a contender in the battle for the Legend trophy. I also will do my best to score more top-10s but I know that the competition will be fierce and hard to beat.”

Team owner Marko Stipp said: “Miguel really impressed us in 2021. As a rookie he has made big leaps and proved to be learning quickly from scratch wherever we raced. We are very happy he puts his trust in us to keep setting the bar higher and higher in 2022.”

The 2022 EuroNASCAR championship season will kick off in Hockenheim (Germany) on April 9-10 and span further races in Valencia (Spain), Brands Hatch (UK), Most (Czech Republic), Zolder (Belgium) and Grobnik (Croatia).