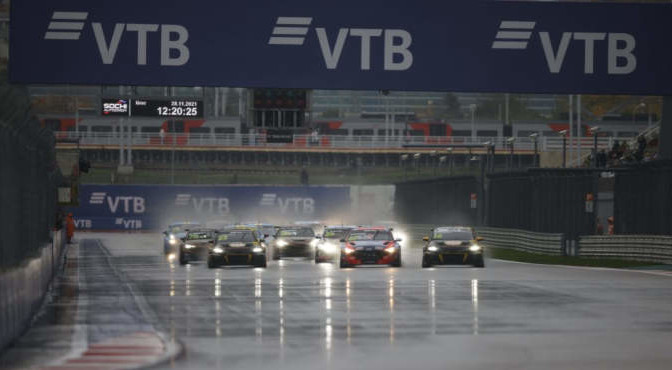 Mikel Azcona and Rob Huff took the wins in two sensational counters at WTCR VTB Race of Russia this afternoon as Yann Ehrlacher became King of WTCR for the second time in as many years following his capture of back-to-back WTCR − FIA World Touring Car Cup titles**.

Ehrlacher, 25, arrived at the Sochi Autodrom for the season-decider 36 points to the good in his bid to be remain on the throne as King of WTCR. With sixth place in the provisional Race 1 order enough to take the crown, Race 2 turned into a high-speed lap of honour as the Frenchman matched his earlier finishing result at the wheel of his Goodyear-equipped Lynk & Co 03 TCR.

Luca Engstler (Engstler Hyundai N Liqui Moly Racing Team) beat Gilles Magnus to the FIA WTCR Junior Driver Title by a single point, the Comtoyou Team Audi Sport ace settling for WTCR Trophy honours, which he secured at WTCR Race of Italy earlier this month, after contact put him out on the opening lap of Race 2.

Meanwhile, Azcona and Huff became winners 11 and 12 of the 16-race season with CUPRA the fifth of five customer racing brands contesting the full WTCR schedule to triumph in 2021, such is the wide-open nature of WTCR. Huff also claimed the TAG Heuer Best Lap Trophy for his charging effort of 2m33.452s in Race 1.

Mikel Azcona completed the WTCR VTB Race of Russia weekend as the TAG Heuer Most Valuable Driver after a five-second penalty dropped Frédéric Vervisch from third to sixth in Race 1.

Azcona’s victory in Race 1 came after a thrilling final-lap pass on Jean-Karl Vernay, while Huff took advantage of a collision between Azcona and Muller just before racing resumed following an intervention by the Honda Civic Type R Limited Edition Safety Car in Race 2.

Vernay and Vervisch joined Azcona on the Race 1 podium with Magnus and Nathanaël Berthon completing the top five in their Comtoyou Audis. And it would get better for Berthon in Race 2 with the Frenchman claiming his first podium of the season ahead of ALL-INKL.DE Münnich Motorsport driver Attila Tassi and Jean-Karl Vernay.

Esteban Guerrieri’s title hopes ended in a car-wrecking crash on the opening lap of the rain-affected Race 1. Despite extensive efforts by the ALL-INKL.COM Münnich Motorsport team to repair his Honda Civic Type R TCR, the Argentine was a non-starter in Race 2, which his team-mate Néstor Girolami led for a time before slipping down the order to seventh behind Ehrlacher.

After finishing P14 in Race 1, Gabriele Tarquini’s final race weekend before he retires from full-time driving began with his rivals delaying their preparations for Free Practice 1 to give him an emotional guard of honour. Unfortunately for the legendary Italian, WTCR VTB Race of Russia ended in retirement following contact. His BRC Hyundai N LUKOIL Squadra Corse team-mate Norbert Michelisz scored points in both races, however.

Kirill Ladygin, the TCR Russia champion, was the best of the ROSNEFT LADA Sport wildcards with P14 in Race 2 the highlight of his weekend.

The grid fell silent prior to Race 2 as the WTCR family remembered Marcela Bertolissi, who passed away earlier this month.