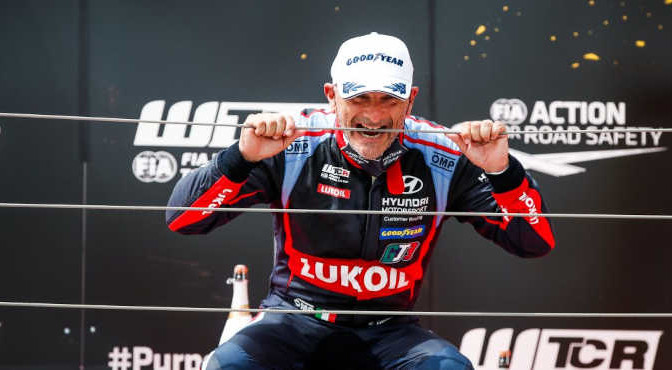 Gabriele Tarquini, a double FIA World Touring Car title winner, has announced his retirement as a full-time racing driver at the end of the season.

The 59-year-old Italian will make WTCR Race of Russia at Sochi Autodrom later this month his final appearance behind the wheel in an FIA World Touring Car event.

In addition, Tarquini raced successfully in Formula 3 and Formula 3000 and took part in 78 Formula One race weekends, qualifying for 38 grands prix and scoring a world championship point in the 1989 Mexican Grand Prix.

He became FIA European Touring Car Championship in 2003 having taken the British title in 1994, while he won national-level touring car races in Germany, Italy and Spain. He spent 12 seasons racing in the WTCC and also competed in the Le Mans 24 Hours.

He used the pre-event virtual press conference for WTCR Race of Italy to make the announcement.

“I feel very sad,” said Tarquini. “After a long career that felt like it would never end, you think this moment will never come. In life, everything has a start and a finish and I am old enough to understand this. WTCR has been a strong series in the last few years, however I’ve struggled a bit in qualifying. Although my race pace was still there, I decided in the break between Spain and Hungary that it was time to say ‘stop’. It was important to me to announce my decision at my home race in Italy − this is the right moment. I don’t want to thank all the people who have helped me in my long career, because I would definitely forget someone! The list is very long, starting with my family and finishing with Hyundai Motorsport. I want this to be my final manufacturer because we have done a great job together. We started with a white sheet of paper and created the Hyundai i30 N TCR, and I won the first race and title for the team. Our relationship is very strong. I don’t want to stop driving completely, as racing is like a drug for me so I will need to be slowly weaned off as I can’t go from 100 per cent to nothing. I’m also speaking with Hyundai Motorsport to see if we can have a different relationship in the future. We have had so many highs together, such as the WTCR drivers’ title in 2018.”

François Ribeiro, Head of Discovery Sports Events, WTCR promoter
“After it became clear there was no full-time WTCC drive for 2017, Gabriele could so easily have given up. Instead, he put all his skill, knowledge and energy into developing the Hyundai TCR project and returned to full-time racing even stronger, even more determined. When Gabriele became the first King of WTCR in 2018, I heard people say that maybe the quality of the drivers wasn’t high enough if a 56-year-old could take the title. But you don’t need me to tell you that the level then, like it is now, was super-high. Gabriele, however, simply proved that age doesn’t slow you down and his performances across that season made him a very worthy winner. Gabriele will go down in history as a gentleman out of the car but a total racer behind the wheel. It has been a privilege to have worked with him for so many seasons. And although we wish him every success and happiness in the future, I can’t help thinking that our paths will cross again.”

Xavier Gavory, WTCR Director
“Gabriele’s retirement is very much the end of an incredible era and the WTCR paddocks and race tracks of the world won’t be the same without him. While the WTCR will go on attracting the best touring car drivers in the business, I doubt we will see another driver of Gabriele’s ability and longevity ever again. A lot is made of his age, but it really is a credit to his character and talent that he keeps delivering year after year, always committed and rarely giving his rivals the chance to defend or attack. The word legend gets used all too easily in sport but Gabriele is a legend for what he has accomplished. There’s no question we’ll all miss him but we look forward to giving him a fitting send-off at the season-deciding WTCR Race of Russia later this month.”

Alan Gow, President, FIA Touring Car Commission
“For three decades Gabriele Tarquini has been at the forefront of touring car racing at both national and international level. His decision to retire from full-time driving at the end of the season marks the end of an incredible career that also included stints in Formula One and so much more beforehand. Of course, I remember well the impact he had on the British Touring Car Championship. Despite his limited knowledge of only some of the tracks, he took the title at his first attempt in 1994 with some formidable drives. His two FIA World Touring Car crowns, including the first WTCR title in 2018 at the age of 57, were among a number of standout achievements that will ensure Gabriele’s place in motorsport history as a touring car colossus.”

FOR MORE ON TARQUINI’S AMAZING CAREER REVISIT THE PODCAST: WTCR FAST TALK, WHEN THE FIRE STARTS IT NEVER GOES OUT
“When I was a baby my father was running a fuel station and beside it there was a small go-kart track. When I was five or six, I start playing with these small karts. The fire start, it was a passion. I loved these small machines and the love never ended, it’s still there. But [before the final WTCC race in 2009] I spoke to my family just before leaving for Macau that probably, if I win the title, I will stop racing because it’s the best moment and I have no [drive] for next season. It’s the world title I tried to catch for a long time and I cannot ask any more from my racing career. After the tough race with the big accidents, being in hospital with the car completely broken, I won the title. Okay, I didn’t have a seat for the next year because it was the last race of the SEAT manufacturer team, but I was still competitive, still enjoying racing, I made a fantastic season and I didn’t want to stop. It was my life and, in the press [conference], I didn’t mention about this idea to stop.”