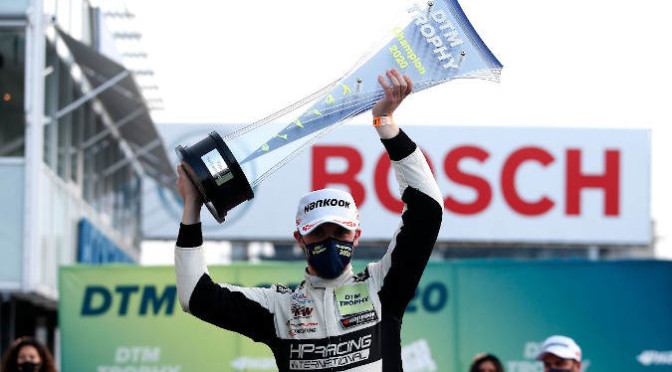 With a highly entertaining race that had plenty of variety, the inaugural season of the DTM Trophy has come to an end. The final race at Hockenheim was yet another action-packed affair: multiple lead changes, two safety car interventions and plenty of wheel-to-wheel duels produced first-class GT racing. Eventually, Tim Heinemann (GER, Mercedes-AMG, HP Racing International) was first across the finish line, taking his seventh win of the season. The 22-year-old, who scored eleven podium finishes from the season’s twelve races, had already sealed the DTM Trophy title in the previous race weekend at Zolder in Belgium. British driver Ben Tuck (BMW, Walkenhorst Motorsport) stayed closely behind Heinemann in the race on Sunday and finished second. Third place went to Lucas Mauron (SUI, Audi, Hella-Pagid racing one), who, like on Saturday, had started from pole position, considerably dropped back during the race and went on to stage a fascinating comeback.

The start was turbulent already: initially, Mauron stayed just ahead of Nicolas Schöll (AUT, Porsche, Allied Racing), who had started from second. The two were side-by-side, while Heinemann tried to make his way on the inside from third on the grid. After slight contact between Heinemann and Mauron, the latter ran wide under braking for the first corner and was temporarily down in fourth while Schöll moved up into the lead. Mauron quickly worked his way up to second again, then overtook Schöll without much ado and thus reclaimed the lead.

Schöll, meanwhile, had increasing problems with his Porsche Cayman and was no longer able to keep up with the front-running group. Meanwhile, Mauron’s Rumanian teammate David Serban spun into the gravel trap after slight contact at a rather difficult position. As a result, the safety car was deployed for the first time. After the restart, during which Mauron stayed ahead of Heinemann, the Swiss encountered more and more problems with his Audi R8 LMS and lost one position after another. The Audi driver dropped back as far as twelfth place and was initially unable to react.

Until the final lap: entertaining five-way battle for the podium positions

After another safety car intervention following the retirement of Briton Ben Green (BMW, FK Performance Motorsport), Mauron found his pace again and started a furious comeback. With aggressive overtaking manoeuvres, the Swiss made up one position after another. Out in front, the top five with Heinemann, Tuck, José María Lopez (ARG, Toyota, Ring Racing) and Jan Kisiel (POL, Mercedes-AMG, Leipert Motorsport) and Mauron was closely together, which led to an entertaining battle for the podium places. None of the others had something in store against Mauron’s pace. On the final lap, the Audi driver even managed to overtake Kisiel to finish on the podium. Eventually, it was just the elapsed race time that halted the Swiss driver’s progress as Tuck and Heinemann weren’t too far off either.

In the final drivers’ standings, champion Tim Heinemann has 265 points from Jan Kisiel (165) , Ben Tuck is third with 133 points. In the teams’ standings, HP Racing International (254 points) clearly comes out ahead of Leipert Motorsport (161). Green wins the juniors’ title with 113 points from Mauron (103).

» Quotes – race 2, Hockenheim
“Finally holding this trophy is a great feeling. A great season has come to an end, the hard work has paid off. Huge thanks to the team and all the others for having supported me all season long. About today’s race: that really was action-packed, many hard, but fair duels. There was some slight contact every now and then, but nothing major. I had a nice battle with Ben Tuck in which I eventually came out on top. Of course, concluding this great season with a win is the best we can imagine.”
Tim Heinemann, Mercedes-AMG, winner
“I started the race from fifth on the grid and I made a good start in which everything went smoothly. That was considerably cleaner than on Saturday and that was already half the job done. Of course, I closely watched the duels in front of me, because I was at the right place at the right time. Waiting and using the chances as they occurred was our motto today. Then, I had a little duel with Tim Heinemann, but he had the better pace and I had to surrender. Anyway, I am really happy with second place and third in the final drivers’ standings.”
Ben Tuck, BMW, 2nd place
“To be honest, I don’t really know whether I should be laughing or crying. Until the first safety car intervention, everything was going well. Then, all of a sudden, I had a gearbox issue, but that solved itself after one lap. At that time, I had already dropped back considerably and I just extracted everything from the car. Of course, I didn’t think that I would still make it onto the podium. The final lap, I was lucky, because I was able to benefit from the duel between José María López and Jan Kisiel.”
Lucas Mauron, Audi, 3rd place