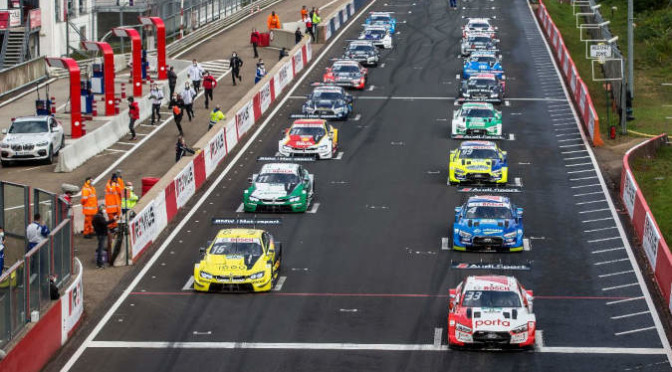 A thriller that is typical for the DTM, thanks to René Rast: at Zolder in Belgium, the battle for the title in Europe’s popular touring car race series is entering its decisive stage. At the same venue last weekend, the defending champion from the German city of Minden made a spectacular recovery with two victories. That enabled him to dramatically reduce the gap to points’ leader Nico Müller (SUI) from 47 to merely ten points. As a result, Müller has to react, just like Robin Frijns (NED), third in the standings, when the DTM is racing at Zolder for the second time this weekend (16-18 October). However, BMW could very well get in the way: last weekend, the brand from Munich proved to be competitive with pole position for Timo Glock (GER) and a podium finish for Lucas Auer (AUT). On Saturday and Sunday, SAT.1 is broadcasting live from 13.00 hrs, all practice and qualifying sessions can be watched at ran.de and grid.dtm.com.

Points’ leader Müller under pressure in the final spurt

René Rast seems to be on a roll. Since the two DTM rounds at the Nürburgring, the 33-year-old from Audi Sport Team Rosberg has never been off the podium: first of all with three second places, then with one third place and most recently, he was on the top step twice. Especially at the 4.011 kilometres long track at Zolder, it was clear to see how well Rast is feeling in his Audi RS 5 DTM. Even a fire in the engine bay left the 2017 and 2019 DTM champion largely unfazed. Müller and Frijns, meanwhile, had to take in considerable setbacks: Frijns even crashed at pit lane exit on cold tyres after his mandatory change. And that on his home track, no less, where the three-time race winner failed to score points for the first time this season. For Müller, just two points were in store after he lost a lot of time as a result of the safety car intervention, caused by nobody else but his teammate Frijns, and ended up only ninth.

Müller, who has been leading the drivers’ standings since the season opener at Spa-Francorchamps in early August, has five wins and 259 points to his name. Rast, a four-time race winner and nine times on the podium so far, has worked his way up to within ten points (249) while Frijns, with three wins and, on a par with Müller, ten podium results so far, dropped to third with 243 points. It is Rast who currently has the psychological ‘momentum’, but all three of them probably need strong nerves in this thriller. Only Audi’s head of motorsport Dieter Gass can already sit back, relax and enjoy the season showdown together with the DTM fans. After the early win of the manufacturers’ title, Audi Sport Team Abt Sportsline has also sealed the teams’ crown already. It is also clear that the 2020 DTM champion will definitely be driving an Audi. Most probably, Zolder will not yet bring the final decision, this is likely to follow in the showdown at Hockenheim from 6-8 November.

2021 DTM: with customer teams rather than works outfits

In the duel with BMW, the brand from Ingolstadt has again secured the DTM triple to mark the end of the era of the two-litre turbocharged engines. For the DTM, that had its baptism of fire at Zolder in 1984, a new chapter starts in 2021 with powerful sports cars. As a result, the works teams from Audi and BMW will be not be racing in the upcoming season. Instead, classic motorsport outfits will be filling the DTM grid with sports cars from various car manufacturers. Among the strong customer teams that are already happily racing among the works outfits is the WRT team from Belgium. With the customer Audis, the three WRT privateer drivers Fabio Scherer (SUI), Harrison Newey (GBR) and Ferdinand Habsburg (AUT) impressively finished in fifth, sixth and seventh place last Sunday.

After the 75th pole position for BMW: Glock has still unfinished business at Zolder

And not just the WRT drivers are providing action in the high-class field. Ex-Formula 1 driver Timo Glock (GER), who ended Audi’s run of 20 consecutive fastest qualifying times with BMW’s 75th pole position in the DTM, and young Sheldon van der Linde (RSA) started from the front row of the grid for the 14th race of the season last Sunday. 21-year-old van der Linde, who, together with Auer, has scored the only race wins for the BMW M4 DTM so far this season, claimed his maiden pole position in the DTM at Zolder last year.

Benoît Tréluyer, meanwhile, will be competing in his first-ever DTM race at Zolder. Audi’s official replacement driver will be racing for the first time as his fellow Frenchman Loïc Duval will be participating in a ten-hour race for the American IMSA SportsCar Championship at the same time. Tréluyer, a three-time Le Mans winner with Audi, will be racing alongside Mike Rockenfeller, second at Zolder most recently, with Audi Sport Team Phoenix. Tréluyer is bringing some experience: almost a year ago, he ended up sixth as the best-placed driver of a DTM car in the so-called Dream Race at Fuji (Japan). This spring, he drove the Audi RS 5 DTM during test sessions.

Like in September, when some drivers extended their stay in the Eifel following two DTM race weekends at the Nürburgring to participate in the 24h Nürburgring, Müller, Rast and Frijns as well as Philipp Eng (AUT, BMW) will also be adding another weekend in Belgium. The DTM quartet will be participating in the 24-hour race at Spa-Francorchamps (Belgium). Both Rast (2012, 2014) and Eng (2016, 2018) already have won this GT3 classic twice.

» Quotes – preview, Zolder 2
“I am very confident going into the second weekend at Zolder, and not just because the first weekend in Belgium went well for me. First and foremost, I felt really well again in the car. Now, we are fully back in the hunt for the championship. Therefore, I am extra motivated to stage two good races again.”
René Rast, Audi Sport Team Rosberg
“I am already looking forward to the next round. We had a good weekend at Zolder. At Zolder, conditions are always changeable and that seems to suit our car. I am also feeling well in such conditions. Our position for the weekend is good. In any case, I am confident and curious what we can achieve on the second weekend at Zolder.”
Timo Glock, , BMW Team RMG
“My plan for the second Zolder weekend is to focus on my performance in Sunday qualifying last weekend and to keep up this form. When I manage to qualify on the first two rows of the grid and drive clean races, my goal of a maiden podium finish and therefore the maiden podium result for WRT in its home round can be within reach. That would be a dream coming true. I have the feeling that this is really getting within reach after last weekend.”
Ferdinand Habsburg, WRT Team Audi Sport