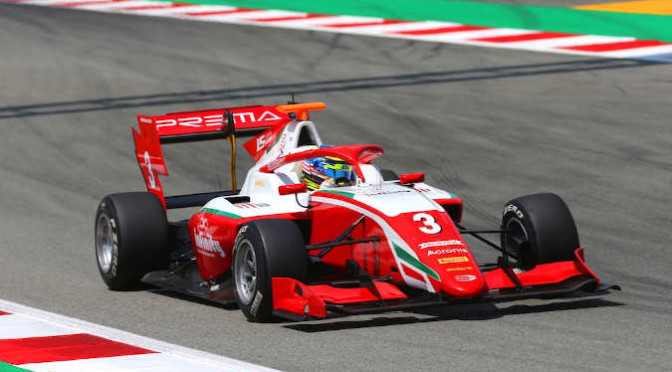 Oscar Piastri posted a stellar win in race 2 of the FIA Formula 3 Championship weekend at Circuit de Barcelona-Catalunya. The 19-year-old Australian was P5 on the grid but powered away with a flaming start. Piastri gained positions with two audacious outside moves in turn 1 and 3, before crossing over to the inside to take the lead. From that moment on, he was able to break away from DRS even when the safety car came in, and sailed towards victory, claiming the fastest lap of the race and two extremely valuable bonus points.

Logan Sargent ended up in fifth place. Starting from P8 following yesterday’s podium finish, the 19-year-old from Florida improved his position at the start but found himself stuck in a DRS train, with the safety cars not helping his cause. Sargent is still leading the driver championship, but with Piastri now just one point away in second place.

Frederik Vesti did not experience an easy race again, starting from the back due to an issue in race 1. The 18-year-old fought his way through the pack but couldn’t do better than a 21st place having started buried down in P29.

“We came away with the win in Race 2 which is a great result from fifth on the grid. I got a mega start and got the lead in the first few corners. That was really positive because that’s sort of where I’ve been playing a bit weak so far this year. After that I just had to break out of DRS and maintain the gap. The safety-car threw a bit of a curved ball in, but again after breaking the DRS zone it was just about maintaining the gap and keeping the tyres in check. It pretty much saved what was otherwise a reasonably average weekend, so massive thank you to Prema for that. Now there are three more rounds to go, let’s see what they will bring!”

“It has been a very difficult weekend beginning with P15 in qualifying and the battery issue in Race 1. Starting from the very back in Race 2, we managed to gain as many positions as we could finishing in P21. I really learned a lot this weekend, and now we have one week off to understand everything to come back much stronger in Spa. I’m looking forward to doing some hard work in the next couple of weeks. I know we have the speed. We only need to put everything together.”
Qualifying: P15
Race 1: DNF
Race 2: P21
Fastest lap: 1:33.685
Fastest lap: 1:36.654
Fastest lap: 1:36.997