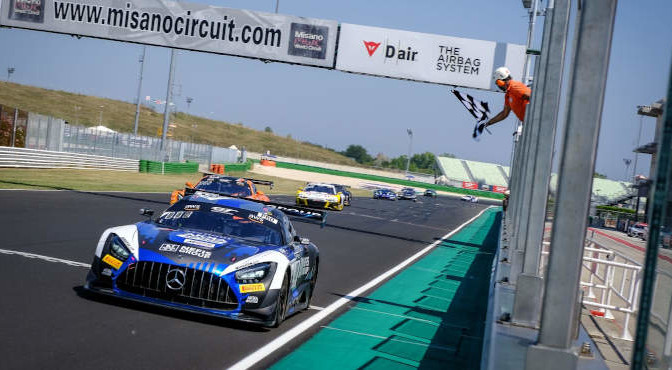 The Italian aced the start and built a four-second gap, only for a safety car period to wipe out his advantage. When racing resumed he once again pulled away from the chasing Kelvin van der Line (#31 Belgian Audi Club Team WRT), who was followed by Albert Costa (#163 Emil Frey Racing Lamborghini) and Maro Engel (#4 HRT Mercedes-AMG).

Marciello handed over to Boguslavskiy without problems, while Ryuichiro Tomita took the #31 Audi from Van der Linde and retained second place. Luca Stolz emerged in third after good work from the HRT squad gained the #4 car a position, while Charles Weerts also made up a spot after taking over the #32 Belgian Audi Club Team WRT machine from Dries Vanthoor.

Boguslavskiy had track position but soon faced immense pressure from Tomita. The two banged doors on a number of occasions, only for the Japanese driver’s charge to end when he ran wide and slipped back to seventh.

This released Stolz to make his own attempt on Boguslavskiy, but the German was also watching his mirrors as Arthur Rougier displayed impressive speed in the #25 Sainteloc Racing Audi. The Frenchman passed Giacomo Altoe (#163 Emil Frey Racing Lamborghini) and Weerts, then found himself in a podium position when Tomita went off.

Boguslavskiy, meanwhile, soaked up the pressure, hitting his marks throughout the final 10 minutes to capture his maiden GT World Challenge Europe Powered by AWS victory. Marciello added a sixth Sprint Cup win and his first at Misano.

Stolz took second to put HRT on the podium in only its second GT World Challenge Europe Powered by AWS event, with Rougier completing a superb drive to finish third alongside experienced teammate Christopher Haase. The #163 Emil Frey Lamborghini was fifth, followed by the #55 Attempto Racing Audi, the #31 WRT Audi, and the #107 CMR Bentley.

Ninth spot went to the Silver Cup-winning #26 Sainteloc Racing Audi of Steven Palette and Simon Gachet, who earned a second successive victory with another assured run. The overall top-10 was completed by the #33 Belgian Audi Club Team WRT entry of Jusuf Owega and brother Hamza, who also clinched runner-up spot in the Silver Cup.

Pro-Am honours went to the #52 AF Corse Ferrari of Louis Machiels and Andrea Bertolini. The experienced crew were eight seconds clear of their closest rivals at the chequered flag.

The Misano weekend concludes this afternoon with a third one-hour race, which gets underway at 15.00 CET. All of the action will be streamed live on the GT World Challenge Europe website and Facebook pages, as well as the GT World YouTube channel.

Timur Boguslavskiy, #88 AKKA ASP Mercedes-AMG: “It was tough! At the beginning of the stint my pace was okay because I had new tyres, but after that I had to defend a lot and I had contact with the [#31 WRT] Audi. After he dropped back I didn’t have any pressure, I just needed to finish. I’m really happy with my first win in the series.”