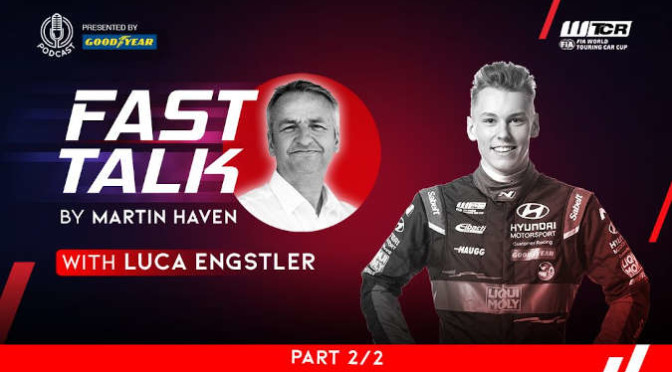 Norbert Michelisz won’t be the only current TCR title-holder on the grid when the 2020 WTCR – FIA World Touring Car Cup kicks off, as scheduled, at Salzburgring in September.

Back in March, Luca Engstler took the TCR Malaysia title for the second year running, a result that should provide a boost, albeit delayed, for when he steps up to the touring car category’s top tier full time with Engstler Hyundai N Liqui Moly Racing Team later this year.

As well as spending lockdown with a fifth outright TCR title in the bag, Engstler has used the last four months to train and prepare extensively, focusing on fitness and diet as he builds up to his maiden WTCR campaign in 2020.

It will follow one wildcard appearance in 2019, plus one outing as replacement for Augusto Farfus in Macau, where the Brazilian was already committed to defending his FIA GT World Cup title and wasn’t allowed to race in WTCR as well.

In part two of his WTCR Fast Talk podcast presented by Goodyear, Engstler tells host Martin Haven just how much that call up to race on the extremely challenging Circuito da Guia meant to him.

“Honestly speaking I would not have been sad or unhappy if Andrea [Adamo, Hyundai Motorsport boss] would have made the decision to take another driver because I had never been to Macau and it was super-important for the team for the championship,” Engstler says. “Of course, the moment he tells you it’s insane, there’s lots of pressure, but seeing the trust of him and the team was the perfect push and confidence to help me do a good result in Macau. I had to give everything to show him, to show the team it was the right choice. I really appreciate what he did there.”

Already highly thought of by the Hyundai Motorsport hierarchy for his TCR title successes and inclusion in the make’s Junior Driver programme, the Macau performance was the confirmation, if any were needed, that Engstler was worthy of a full-time, Hyundai Motorsport Customer Racing-supported WTCR ride in 2020.

“I was over the moon getting the message I would be in the cockpit for WTCR 2020,” remembers Engstler. “Of course, it’s kind of bad that everything is delayed but I still can’t believe it and I can’t wait to jump into the car for FP1 [in Austria]. I’m super-happy to be there. It’s the first [full] season in WTCR, it’s always different being a wildcard and a full-season entry.

“I don’t put pressure on myself or high expectations. I know there is potential but as long as I keep working hard day and night, I can’t tell myself on Sunday night when I go back home from Salzburging I could have done more. I will do more than I can.”