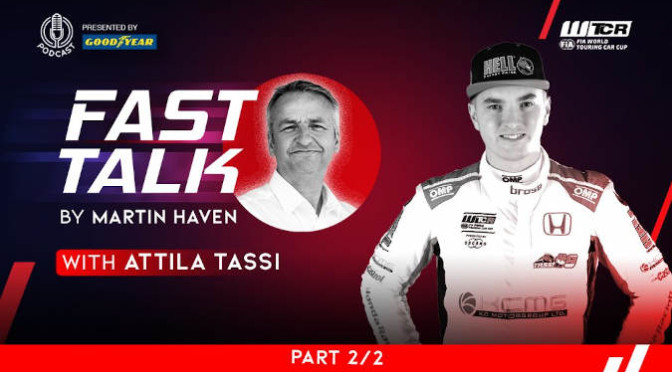 In part two, which is available from 12h00 CET today (Friday), Tassi discusses his successful stint in TCR International and his step up to WTCR for 2019 with a famous team-mate by his side.

“I got the Honda driver contract [for 2019] and I hadn’t realised for a week after I signed it even, the feeling was indescribable,” Tassi remembers. “Obviously it was my dream but I didn’t expect to get that contract at the age of 19. I was very happy to have it and when I knew Tiago [Monteiro] would be my team-mate and retuning after his accident for the full season, I was very happy.

“I knew Tiago from 2017. We met in Oschersleben and we were speaking a little bit but obviously when you are team-mates, it’s a completely different relationship between us. All season it was very good to work with him and to learn a lot from him.”

Monteiro’s guidance proved to be particularly handy at WTCR Race of Portugal last June. Tassi was a newcomer to the Vila Real street track but absorbed all his Portuguese team-mate had told him to produce a sensational Second Qualifying performance.

After a troubled Saturday, the KCMG Honda Civic Type R TCRs were transformed for Sunday. Not only did Tassi go fastest in the first two phases of Second Qualifying, he was quickest again when it mattered most to snatch the DHL pole from home hero Monteiro by 0.141s in the one-lap shootout.

“The highlight [of last season] was the Vila Real pole position in Q1, Q2 and Q3,” Tassi affirms. “The track is completely another level. It’s one of the hardest tracks in the world and it was also new for me. There are some bumps, chicanes, even a roundabout, but I enjoyed it a lot except in the race and what happened, but this is motorsport.”

Tassi made the perfect start and led for the first four laps until disaster struck. A spark plug issue slowed him down and handed Monteiro a lead which he would convert into a famous win. While Tassi was quick to join in with Monteiro’s richly deserved celebrations following his recovery from serious injury, the heartache Tassi suffered that day spurred him on for the rest of the season.

“Vila Real was a very unfortunate weekend for me, but I bring my attitude from [Vila Real] qualifying to China and it was working quite well,” says Tassi. “I moved up a lot of positions in the races because of staying out of all accidents and making some good moves. But it was good to be building up and improving myself, it was good experience and good results.”

After non-scoring in Japan and Macau, Tassi was back in the top 15 in Malaysia, where his fellow Hungarian and former team boss Norbert Michelisz secured the title at the expense of Esteban Guerrieri, Tassi’s fellow Honda-powered driver.

“When we started the weekend, I knew the situation that if I could be more on the front in the qualifying probably there would be team orders. I didn’t want to hold up Norbi because if I come back to Hungary then the fans would be waiting to kill me. If Honda said what I have to do, I do what they say, obviously, but it would have felt very weird.”

As it is, Tassi, who will switch to ALL-INKL.DE Münnich Motorsport for 2020, will be welcomed with open arms by the Hungaroring faithful when the WTCR visits his home track, as planned, from 17-18 October. “I’m very happy after it was cancelled that luckily things changed and we will also come in my home country in front of my very good and loud fans.”

Attila Tassi’s WTCR Fast Talk podcast presented by Goodyear, the WTCR’s official tyre supplier, and hosted by Martin Haven is available in two parts at FIAWTCR.com and other outlets. Click here to listen or follow this link: https://www.fiawtcr.com/wtcr-fast-talk/