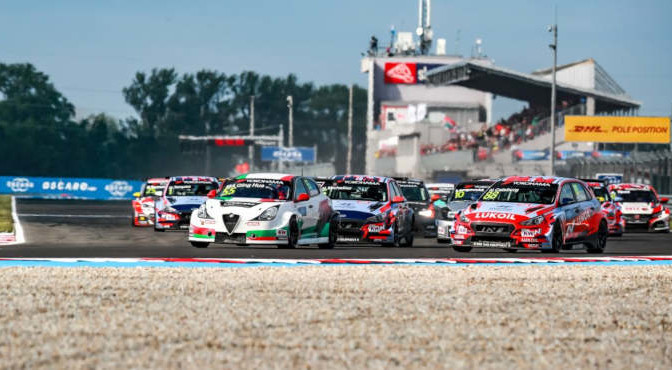 Ma Qinghua produce one of the drives of his life to win Race 3 at WTCR Race of Slovakia, his maiden victory in the WTCR – FIA World Touring Car Cup presented by OSCARO and the first by a Chinese driver in the all-action series.

Charging through from the second row of the #WTCR2019SUPERGRID, Ma was pushed hard by Norbert Michelisz (BRC Hyundai N Squadra Corse), but Ma just held on to take the win in his Alfa Romeo Giulietta Veloce TCR by Romeo Ferraris.

His team-mate Kevin Ceccon capped a great weekend for Team Mulsanne by finishing just behind Michelisz in third, meaning the Italian squad leaves Slovakia with four podium finishes. With his native Italy celebrating Mother’s Day on 12 May, Ceccon dedicated the win to Michela Cerruti, the Romeo Ferraris Operations Manager who gave birth to a son last month.

“This is the best we can get,” said a delighted Ma. “Thank you to the team for all their hard work. This season has been a struggle, so I’m really happy for this win. It’s always the same story when you are in front: the car behind you is very quick! There was lots of pressure but I tried to calm down because one mistake could have destroyed everything. We’ll have a big party tonight!”

Ma storms through for maiden win
Starting third on the grid, Ma made a great launch off the line to drive between DHL Pole Position starter Nicky Catsburg and Michelisz to take a lead he would not lose. It soon emerged that BRC Hyundai N LUKOIL Racing Team’s Catsburg was struggling with a car-related problem and after lap five he began to slip down the order, as the battle at the front came down to a three-way fight between the two Alfas and Michelisz’s Hyundai. The Hungarian was satisfied with his runner-up finish, following his third place in Race 1.

Comtoyou Team Audi Sport’s Niels Langeveld completed an encouraging weekend with a strong fourth place, having started seventh on the grid. He finished ahead of PWR Racing’s Mikel Azcona and ALL-INKL.COM Münnich Motorsport’s Esteban Guerrieri. The Argentinian might have dropped a place from his starting position, but he fared better than his Honda team-mate Néstor Girolami. The Race 2 winner and #ROADTOMALAYSIA points leader was knocked off on lap one and was classified down in P24 after an electrical issue struck.

BRC Hyundai N LUKOIL Racing Team’s Augusto Farfus finished seventh ahead of Comtoyou DHL Team CUPRA Racing’s Aurélien Panis and Gabriele Tarquini, who at least scored points this time after a drive-through penalty for contact with Panis in Race 2 had dropped him down the order.

Wildcard entry Luca Engstler repeated his P10 from Race 1 following pre-race repairs, ahead of Thed Björk who had a new radiator in his Cyan Racing Lynk & Co 03 TCR after trouble in Race 2.

Catsburg clung on to finish in P12, ahead of Rob Huff who suffered a hit from behind by PWR Racing’s Daniel Haglöf, who finished the race in the pits. Yvan Muller and Gordon Shedden were the final points scorers.

Race 1 report: Vervisch victorious for Comtoyou Team Audi Sport
Frédéric Vervisch scored his first WTCR / OSCARO victory of the year in an action-packed Race 1 after rising from ninth on the grid. The Comtoyou Team Audi Sport driver made a great start to jump up to second on the first lap, then passed Team Mulsanne’s Ma Qinghua for the lead to claim a maiden 2019 win for the Audi RS 3 LMS. “Great race, great result,” said Vervisch after his second career win in WTCR / OSCARO. “The start was great, although I got hit from behind at Turn 3, but didn’t go off. Maybe I took more risks than the others, then just kept my pace. I was surprised at our good pace.”

From the lights, Ma made a great start from the second row to drive through the middle of DHL Pole Position starter Nicky Catsburg and fellow Hyundai driver Norbert Michelisz to take the lead in his Alfa Romeo Giulietta Veloce TCR, as Vervisch made up a fantastic eight places on that opening lap. Behind them, #ROADTOMALAYSIA points leader Nestor Girolami was in trouble, as he and Vervisch’s team-mate Niels Langeveld went off in a gravel trap. Team Mulsanne’s Kevin Ceccon was another to retire early.

The safety car was called upon in the wake of the incidents, but racing resumed on lap four as Ma was forced on the defensive. Vervisch made a great move for the lead on lap five and was through. “Ma was quicker on the straights, but I was better in the corners,” said the winner. “He was very fair when I challenged him.”

As Vervisch opened a gap, Ma now faced attention from Michelisz, who worked hard to pass. But the Chinese driver held on to claim a welcome podium finish for Team Mulsanne, with Michelisz also happy with third.

Jean-Karl Vernay was fourth for Leopard Racing Team Audi Sport after rising from seventh on the grid, while the action came thick and fast behind him.

BRC Hyundai N LUKOIL Racing Team’s Augusto Farfus was another to rise up the order, coming from P19 on the grid to finish an astonishing fifth. He was ahead of fellow BRC Hyundai ace Gabriele Tarquini, the 2018 WTCR / OSCARO title winner claiming sixth. Farfus’s team-mate Catsburg faded from his DHL pole to finish seventh, sporting heavy damage to the front left of his Hyundai which was sustained early in the race. He was ahead of Tom Coronel in eighth, with PWR Racing’s Mikel Azcona and wildcard entry Luca Engstler, from Germany, completing the top 10.

The other points scorers were Yavn Muller – up from P17 on the grid in his Cyan Racing Lynk & Co 03 TCR – Gordon Shedden, Rob Huff (up from P24), SLR Volkswagen’s Benjamin Leuchter and ALL-INKL.COM Münnich Motorsport’s Esteban Guerrieri. PWR Racing’s Daniel Haglöf, who had run in fifth early in the race after starting fourth, was another to suffer damage and dropped to P19 by the flag.

“Congratulations to all the guys in the team because my car was really damaged after my Race 1 accident,” said #ROADTOMALAYSIA points leader Girolami, whose victory was his third of the season. “I didn’t know if we would even do the race, so thanks guys. We’ve had an amazing car all weekend and it’s amazing to have Esteban second and to be leading the points. As soon as I saw he was second I knew we were okay, because we don’t want to fight. Sometimes I win, sometimes he wins. That’s the way we want to work.”

Huff looked to have lost his lead to Girolami from the lights, but took a wide line at Turn 1 and undercut the Honda to head the field. But his advantage didn’t last as Girolami made his definitive move on the second lap. Guerrieri, who had started in sixth, was the next to demote Huff on lap three. The SLR VW Motorsport driver did his best to cling on to third in his Volkswagen Golf GTI TCR, but Ceccon overpowered him at the start of lap seven to claim third, following team-mate Ma Qinghua’s second place in Race 1.

Comtoyou Team Audi Sport’s Niels Langeveld was eighth ahead of Ma, who did well to finish ninth after an early moment. Tom Coronel completed the top 10 after getting the best of old rival Yvan Muller, the pair having started in P27 and P20 respectively. The other points finishers were Leopard Racing Team Audi Sport duo Jean-Karl Vernay and Gordon Shedden, Mehdi Bennani and Johan Kristoffersson.

WTCR drivers take EWC-style start
Leading drivers from the WTCR – FIA World Touring Car Cup presented by OSCARO demonstrated their EWC-style start skills at the Slovakia Ring. Riders from the FIM Endurance World Championship – which formed part of this exciting double-header weekend with WTCR / OSCARO – begin races by sprinting from one side of the start/finish straight to the other, climbing onto their bikes and accelerating away. Ahead of the 8 Hours of Slovakia Ring getting underway, Thed Björk, Nicky Catsburg, Kevin Ceccon, Tom Coronel, Benjamin Leuchter, Tiago Monteiro and Jean-Karl Vernay emulated their EWC counterparts by running across the start/finish straight and climbing into their waiting World Touring Cars. And after strapping themselves in, they drove off for a lap of the 5.922-killometre Slovakia Ring behind the Audi WTCR / OSCARO safety car.