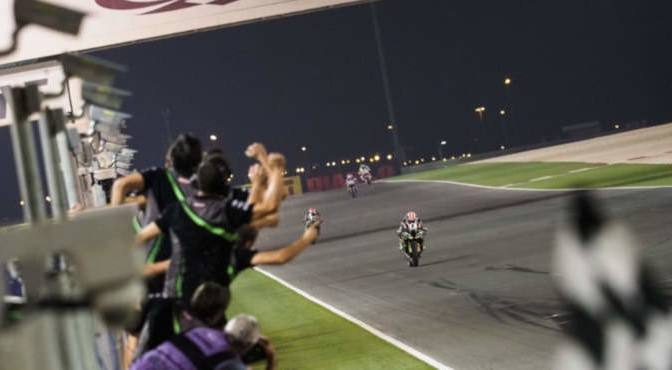 Seventeen down, one to go. Jonathan Rea (Kawasaki Racing Team WorldSBK) has won the first race of the Pirelli Qatar Round and matched Doug Polen’s record for the most race victories in a single season, with 17 additional laps still to go tomorrow at the Losail International Circuit. He also moves to within just 12 points of the highest points tally in one WorldSBK season. The 2018 MOTUL FIM Superbike World Champion was absolutely untouchable out on the Qatari circuit, getting the holeshot at the lights and never relinquishing the race lead. Tom Sykes (Kawasaki Racing Team WorldSBK) completed a KRT one-two, with Alex Lowes (Pata Yamaha Official WorldSBK Team) getting the better of Eugene Laverty (Milwaukee Aprilia) for third position after a race-long battle.

A dream start for the Northern Irishman pushed him into first place before even arriving to turn 1, while Laverty and Lowes jostled behind to see who could follow the Kawasaki bikes. The Aprilia’s incredible top speed on the kilometre-long straight was Laverty’s best weapon all throughout the race, using the slipstream to move into third after lap one.

With Rea managing a comfortable two-second gap over his teammate and both riders a step above the rest in terms of consistency, all eyes were set on the Yamaha and Aprilia battle behind. Lowes moved ahead in lap 6 but was again beaten on the front straight three laps later. It all came down to an epic last lap battle where they rubbed shoulders all the way through, including a brave final pass from the Englishman at turn 12. Laverty tried to return the favour on the final turn but nearly lost the front end, handing Lowes the final podium position. There is a silver lining for the Aprilia rider however: he starts from P1 on tomorrow’s grid.

Xavi Fores (Barni Racing Team) followed the front quartet with a confident race all the way to the final lap, but late issues pushed him down to thirteenth to the benefit of Marco Melandri (Aruba.it Racing – Ducati). The Italian takes fifth position and will start his last race for the Borgo Panigale squad from the front row of the grid.

The final race of the 2018 WorldSBK season is upon us! Tune in tomorrow at 19:00 local time (16:00 GMT) to find out who can claim the last win of the season,
P1 – Jonathan Rea (Kawasaki Racing Team WorldSBK)
“It was a really fun race especially in the beginning as I was able to feel really good with the ZX-10RR. In the last five laps I started running into some problems with my front tyre and it was a case of nursing it home, so there’s definitely work to do for tomorrow to finish in the same position. I’m so happy to have 17 wins in a season and so fortunate to be in this situation with the Kawasaki Racing Team, and the bond I have with the team and the bike – it’s incredible. Thanks to everybody who has come out to watch tonight, it’s probably the biggest crowd we’ve had here, so thank you.”

P2 – Tom Sykes (Kawasaki Racing Team WorldSBK)
“Yeah, it’s not bad but it would’ve been better for a win! I enjoyed the race but got caught up at the beginning, but overall enjoyed it from start to finish and had a big smile. I came under some pressure from behind and I was just trying to maintain the gap to Jonathan, and then towards the end of the race he was just managing the front tyre a little bit better than me, and was able to get it in and out of the corner a little bit more effectively, whereas I was relying more on corner speed so we need to look at that for tomorrow. But, second position is not too bad and we know how fast Jonathan is here and it would be nice to try and go one better tomorrow. I think it’ll be a different race from the third row, but we’ll give it the berries and try to make the last one count; it’s so nice to be here under the floodlights, I really enjoy this event so we’ll try again then.”

P3 – .Alex Lowes (Pata Yamaha Official WorldSBK Team)
“To be honest I enjoyed the whole race, I was pushing quite hard and I think Eugene had some problems with the front tyre, which gave me a small door to try and get through on the last lap. I really enjoyed battling with him and fair play to him, hopefully tomorrow we can try to improve the rear grip a bit and get onto the podium. It’s great to be back here after a difficult middle part of the year.”