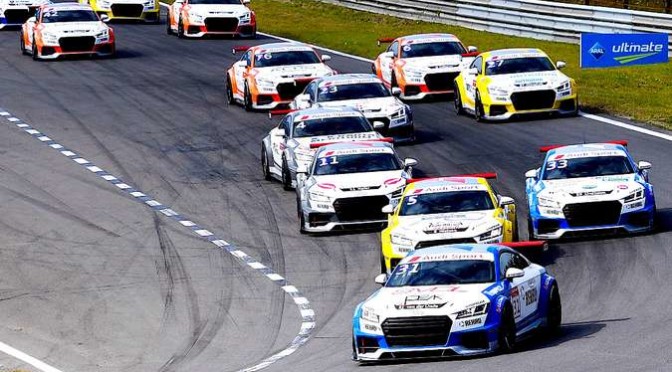 South Africa’s Sheldon van der Linde was in combative form as he raced to a dominant race win and a strong second place to see him back into Audi Sport TT Cup title contention when the series visited the Dutch Zandvoort seaside circuit over the weekend.

Van der Linde qualified second and held on to a close second place in Saturday’s first race, before starting Sunday’s second race in pole position and on fresh front tyres as he cleared off to win by almost ten seconds. Sheldon pruned his championship deficit to his championship leading German rival Dennis Marschall back down to seven points in the process.

“That was much better, and a great relief after the Norisring disappointment a few weeks ago,” Sheldon smiled as he enjoyed the spoils of victory Sunday afternoon. “It was important to regain as many championship points as possible on the front two and we did exactly that. “My experience at Zandvoort this weekend was great, the track is incredible and something very special and demanding on us.

“The car was perfect today – I was able to apply everything that we had learnt from the data analysis of the previous sessions and we definitely hit the sweet spot on the setup for the second race. “The important thing is that we ended up in front of Dennis twice this weekend and I managed to jump Joonas Lappalainen to regain second in the championship chase.”

“All in all, this was a very successful and important weekend for our championship and we go into the summer break on a positive footing. “We race at one of my favourite racetracks at the Nurburgring next — I plan to take full best advantage of that.”

Audi Sport TT Cup rookie Sheldon will be looking to build on his four race wins out of eight starts in the 2016 series at the Nurburgring weekend 9-10 September. “We’re back on track and I predict a great second half of the season following the summer break.”