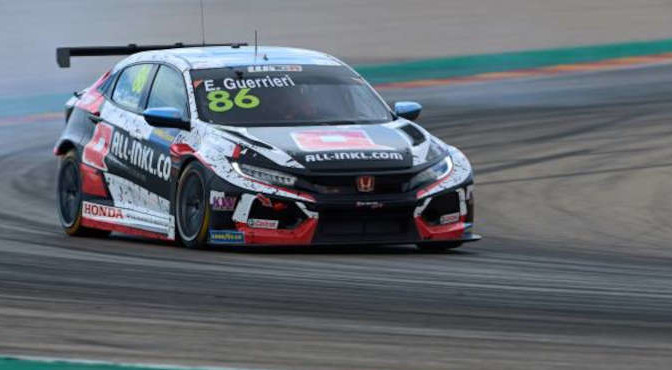 Esteban Guerrieri headed an ultra-close Honda battle to make it through to Q2 in qualifying for Sunday’s WTCR – FIA World Touring Car Cup races at Motorland Aragon.
The Argentinian improved with his final effort in Q1, and that was enough to guide him through to the second part of qualifying as 0.068 seconds covered three Honda Racing drivers.

Once in Q2, Esteban set a best time of 2m06.646s in his Civic Type R TCR that fell just a tenth shy of 10th place and what would have been pole position on the partially reversed Race Two grid.

The 10-minute length of Q2 combined with lap times around the 5.344-kilometre Aragon circuit make it possible to record only one run, and though Esteban’s sole attempt had him 10th for much of the session he was bumped down to 11th after the chequered flag.

Earlier, in Q1, Nestor Girolami found himself just the wrong side of the cutoff in 13th having been half a tenth slower than his ALL-INKL.COM Munnich Motorsport team-mate.

That was particularly frustrating for ‘Bebu’ as he had set the fastest first sector at the time on his final run, and improved in sector two as well, before making a mistake into the Turn 12 left-hander that follows a long downhill run.

The other driver in that Honda trio was Attila Tassi, who was a mere 0.018s back from Nestor in 14th in his LIQUI MOLY Team Engstler Civic Type R TCR.

Having set the seventh-fastest time in FP1, Attila then experienced a vibration in the second practice session that was not diagnosed before qualifying, and felt he lost time in the higher-speed corners as a consequence.

His team-mate Tiago Monteiro was three positions further back in 17th.

Tiago experienced a number of undiagnosed issues throughout Saturday that magnified the already high pace deficit the car – carrying 40kg compensation weight for a third weekend in a row – traditionally experiences at Aragon.

We really tried to squeeze the maximum possible from qualifying. We improved the car throughout the day and on a track that we know is not our best we needed to do a perfect lap and put all the sectors together. Unfortunately, although it was good it was not enough. Sector one didn’t feel great today, and I probably left a couple of tenths there; in the end, the amount this cost probably would have given us a top 10. I’m a bit disappointed because we tried to extract the most out of the conditions and the situation. Still, it was a good day of driving, I had fun, and as a team we worked very well.

We wanted to be in the top 10 and I was on for a good lap on my second attempt in Q1, setting the best sector one of the session and a very good sector two, but in sector three I lost the rear at Turn 12. There was a tyre barrier that I didn’t want to touch in case it damaged the car, but avoiding it cost me the lap. We need to move forward and think about tomorrow – there’s still a possibility of rain, so if that arrives there’s a chance to get good points. As it stands we’re struggling a lot in these hot conditions, as we do each year here, so for now the target is to finish and score points in both races.

Expectations weren’t high, knowing our previous results here, but every time we are on track it’s a new opportunity and we never turn up like we are already beaten. We had a good programme, doing some race simulations in FP1 before trying a new tyre at the end that we had saved from Hungary. FP2 was mainly about preparing for qualifying because we saw a chance to go to Q2, but then I had a right-front vibration. We changed the driveshaft for qualifying because we were thinking maybe that would be it, but unfortunately it wasn’t. I felt I was losing out in terms of speed in the right-hand corners and at top speed too. Still, looking at the circumstances I feel like we took what we could.

It’s not a stretch to call that a disappointment, even in the context of our expectations for this weekend. Quite a few things have been going wrong, and we have had some issues, we can say that with some certainty – we are far off the pace and that can’t be put down alone to any of the driver, the team, or the car’s expected performance level here. It just doesn’t add up. We will put all of our work in overnight to understand the issues and make the car better for tomorrow, but it’s going to be a difficult task.