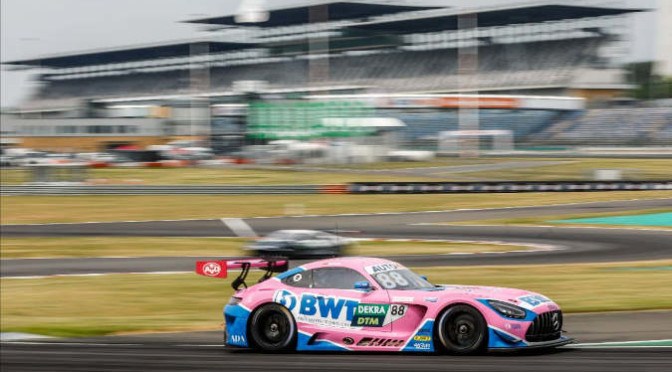 25 kilograms of success ballast weren’t able to stop him either: after his success on Saturday, Schubert BMW driver Sheldon van der Linde also charged to DTM victory at Lausitzring Turn 1 powered by Autohero on Sunday as well. With the Schubert Motorsport BMW M4, the South African claimed pole position in the morning and scored 25 points with another commanding performance. Second place in the race on Sunday went to Maro Engel (GER) with the GruppeM Mercedes-AMG, who also secured the additional point for the Autohero Fastest Lap Award. Three-time DTM champion René Rast (GER) came third, scoring his first podium finish with the ABT Audi R8 since his return to DTM. Classified fourth, Philipp Eng (AUT) completed the good day for Schubert.

“It really wasn’t easy, especially at the end, Maro Engel was putting me under quite some pressure. I am delighted that it worked out and I am heading to Imola with a good feeling,” a happy Sheldon van der Linde said. Engel was satisfied, too, although he had to admit: “To catch Sheldon, it simply wasn’t enough today.” Third-placed Rast thanked his ABT team for putting in a night shift: “Yesterday, I was moaning more than racing because I wasn’t happy at all. We worked on the car all night long, that was a good step.”

By virtue of his pair of wins at Lausitzring Turn 1 powered by Autohero, Sheldon van der Linde moved up into the points’ lead of the 2022 DTM. With 66 points, the 23-year-old is 15 points ahead of Mirko Bortolotti (ITA), who finished sixth with the Grasser Lamborghini on Sunday, and 18 points ahead of Lucas Auer (AUT, WINWARD Mercedes-AMG), who scored four points by finishing eighth.

Like on Saturday, Sheldon van der Linde laid the foundation for his success directly at the start where he was able to stay out of all the position fights. Further down, as almost all the time in DTM, there was plenty of action. Especially in the banked corner Turn 1, exclusively used in DTM, the 28 top-notch drivers provided spectacular racing for the spectators.

One driver was unable to take the start on Sunday afternoon: Felipe Fraga’s Red Bull AF Corse Ferrari caught fire in qualifying in the morning, the Brazilian took the fire extinguisher himself to fight the flames. However, the time prior to the race was insufficient so that the South American’s Ferrari 488 couldn’t be put on the grid.

The next chance to score points is from 17 till 19 June. Then, Ferrari and Lamborghini have a home round at Imola, just like Bortolotti, second in the points. And Sheldon van der Linde will be the one everybody is after.