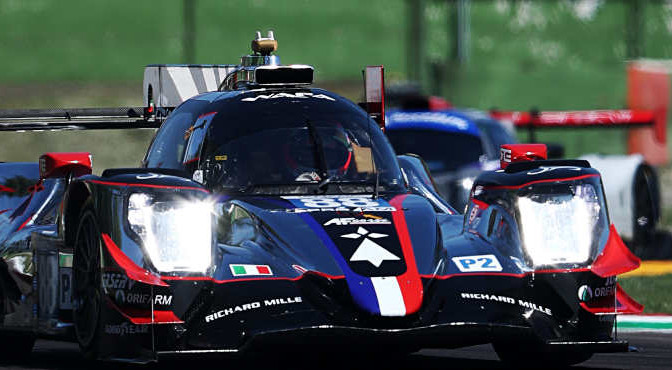 The Italian driver threw down the gauntlet to the rest of the 17-car field at the start with a 1m32.396 lap in the no88 AF Corse Oreca-Gibson and then came in for fresh rubber. Mathias Beche in the no31 TDS Racing X Vaillante Oreca came closest to pushing Rovera off the top spot, the Swiss driver, who won the last ELMS race at Imola back in 2016 with TDS Racing, posted a 1m32.613 but couldn’t get closer than that.

On fresh rubber Rovera then improved his time to a 1m32.269 just before the chequered flag was shown to end the session.

Row 2 of the grid for tomorrow’s race will be headed by the no9 Prema Racing Oreca with Round 1 winner Louis Deletraz posting a 1m32.701 lap, 0.432s behind Rovera and 0.082s ahead of the no37 Cool Racing Oreca of his fellow 2021 ELMS Champion Yifei Ye.

Job Van Uitert put the no65 Panis Racing Oreca on Row 3, alongside the no22 United Autosports Oreca of 2020 ELMS Champion Phil Hanson.

The only car not to post a time in qualifying was the no24 Nielsen Racing Oreca of Ben Hanley after the car lost a wheel on the outlap and had to be parked behind the safety barriers for the qualifying session.

The no17 Cool Racing Ligier will start from the front of the LMP3 field in tomorrow’s 4 Hours of Imola after Malthe Jakobsen posted three pole position laps, besting the rest of the field by nearly half a second.

The 18-year-old winner of the 4 Hours of Le Castellet posted a best lap of 1m37.182 in the no17 Ligier JS P320, which was 0.492s ahead of the no4 DKR Engineering Duqueine driven by Sebastian Alvarez, with the Mexican driver finishing the session just 0.075s ahead of the no14 Inter Europol Competition Ligier of Noam Abramczyk.

Abramczyk will be joined on Row 2 by the no2 United Autosport Ligier after Bailey Voisin set a 1m37.998 lap late in the session, with Nicolas Maulini putting the no27 Cool Racing Ligier at the head of Row 3 at the chequered flag with a 1m38.017.

The no69 Oman Racing with TF Sport Aston Martin claimed the LMGTE pole for tomorrow’s 4 Hours of Imola, the first ever ELMS pole for a driven from Oman.

Al Harthy posted a 1m42.299 lap early on in the 10 minutes session and then improved to an unassailable 1m41.974 Sarah Bovy in the no83 Iron Lynx Ferrari F488 GTE EVO was the closest rival, the Belgian driver setting a 1m42.784 before pitting for new rubber and then posting a 1m42.357 at the chequered flag, 0.383s behind the flying Aston Martin Vantage.

Row 2 will be headed by the no18 Absolute Racing Porsche 911 RSR-19, with Andrew Haryanto jumping up the order with a 1m42.926 lap right at the end of the session to push the no32 Rinaldi Racing Ferrari into 4thon the grid by 0.149s

CLICK HERE for the results from qualifying for the 4 Hours of Imola.