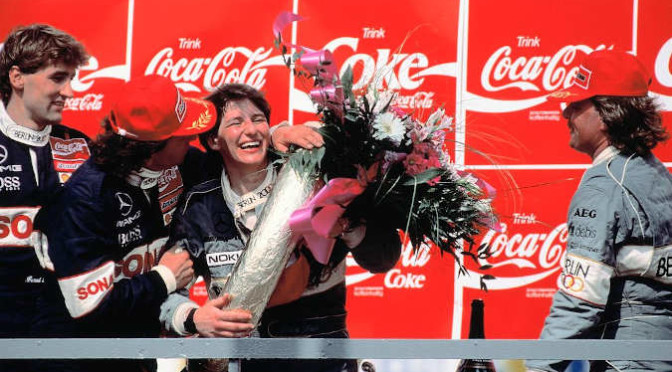 Ellen Lohr pulled off a historic achievement by becoming the only woman to date to have won a DTM race. She did so at Hockenheim on 24 May 1992, having kept Formula 1 world champion Keke Rosberg and the later DTM record champion Bernd Schneider at bay. At the occasion of the International Women’s Day on 8 March, the German, born in Mönchengladbach, is convinced: “It is only a matter of time until we will have fast women in DTM again.” Since the series’ start in 1984, ten women raced in DTM so far. Lohr explains her confidence with numerous initiatives and sees a strong generation coming up. Sophie Hofmann is an example: the 22-year-old from Waldenburg in Saxony is racing in the junior race series DTM Trophy, the DTM’s second-tier category.

For Ellen Lohr, it is clear: “Women also have the physical characteristics needed in motorsport.” From her perspective, the support is far more significant: “For many years, there hasn’t been real progress, but now, things are moving really quickly. Strong generations are coming up through the junior ranks that are at a good level to make their mark in DTM pretty soon already.” The former Mercedes driver adds: “Along with the switch to GT3 race cars in DTM, the best era for a woman to be successful in DTM is now coming up.”

Ellen Lohr sums up further reasons why the perspective of success for women has improved: “Generally, there are many activities in motorsport to get more women involved. Among them are the W Series as a single-seater race category exclusively for women, the ‘Women in Motorsport’ initiative by the global governing body, the FIA, or the ‘Dare to be different’ organisation founded by Susie Wolff.”

At the end of the 1987 DTM season, Ellen Lohr already competed in three races with the Alpina BMW M3 and scored a podium result right away by finishing second at Salzburgring. On the same weekend and at the same venue, she also sealed the German Formula Ford title. However, she turned down an offer to switch to DTM racing full-time as a BMW works driver as she preferred to continue her career in single-seaters. In 1991, she then accepted a deal proposed by Norbert Haug on behalf of Mercedes. “I simply couldn’t refuse a proper works contract with a salary and everything that comes with it.” One year later, she stood on the top step of the podium. For Ellen Lohr, there is no doubt: “Yes, that victory in 1992 was the highlight of my career. It impresses me over and over again how many people still recall it.”

Lohr was the first and to date also the only female DTM race winner. The first woman to race in DTM was  Lella Lombardi (Alfa Romeo) back in 1984, the first woman to finish on the podium was Beate Nodes (Ford Sierra), who came third at the AVUS in Berlin in 1986. Henny Hemmes (Chevrolet) from The Netherlands competed in a few races while Mercedes Stermitz from Austria and Annette Meeuvissen raced for one and three seasons respectively as works drivers for BMW. The female racers who competed for Audi and Mercedes between 2006 and 2012 didn’t have an easy time either: Susie Stoddart from Scotland, who later married Toto Wolff, the current head of motorsport at Mercedes, achieved a few top ten results with Mercedes. Meanwhile, Vanina Ickx from Belgium, Katherine Legge from the UK and Rahel Frey from Switzerland all raced for Audi.

In 2021, female drivers will be in action on the DTM platform as well. Sophie Hofmann from Waldenburg in Saxony will be racing in the junior series DTM Trophy. The 22-year-old will be driving an Audi R8 LMS run by the Heide-Motorsport team