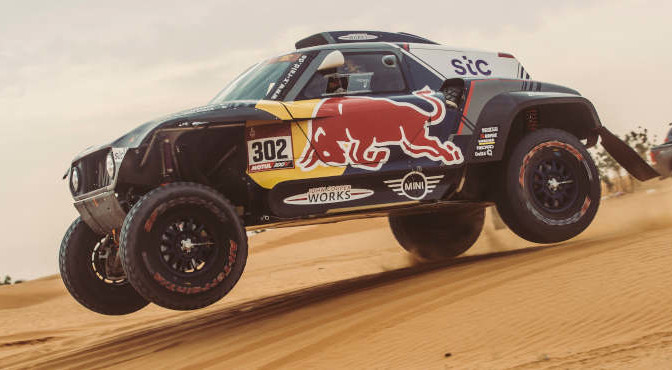 - The Dakar cavalcade departed on Thursday from Riyadh to Al Quisumah for a 457km timed special stage with massive dunes to cross, stony sections that threatened punctures and tricky navigation.

- South African De Villiers dug deep in the car category to claim his first 2021 stage win by 58 seconds from compatriot Brian Baragwanath with Frenchman Peterhansel 2m25s behind in third spot.

- With Al-Attiyah fourth and reigning champion Carlos Sainz ninth, it means Peterhansel now lies 6m11s ahead of the Qatari overall with Sainz 48m13s back in third and Poland’s Kuba Przygoński in a creditable fourth.

- Three-time champion Al-Attiyah, 50, revealed: “It was not easy to open. We saw a lot of bikes coming and we got confused. At the beginning, we lost eight or nine minutes. I’m happy to have got here. Stéphane did a very good job because he stayed behind me all the way.”

- In the truck category, Karginov excelled with just under five-and-a-half hours logged behind the wheel to win the stage with fellow Team Kamaz Master driver Dmitry Sotnikov third on the day.

- In the bike category, Australian Toby Price and Sam Sunderland finished third and fifth on the day for Red Bull KTM Factory Team to move up to fourth and fifth respectively overall behind Argentine Kevin Benavides.

- Briton Sunderland explained: “It was a really difficult stage that started off with a lot of tricky navigation. Lots of places were looking the same and there weren’t many references. I did a few circles in the first part and then after the refuel I tried to push to recover some time.”

- Former champion Matthias Walkner finished eighth with Štefan Svitko and rookie Daniel Sanders well placed to break into the Top 10, however the last two stages have seen Mohammed Jaffar and CS Santosh withdraw so hopefully a speedy recovery from their injuries.

- Friday’s Stage Six is from Al Qaisumah to Ha’il with 448km of special stage ahead of Saturday’s rest day.