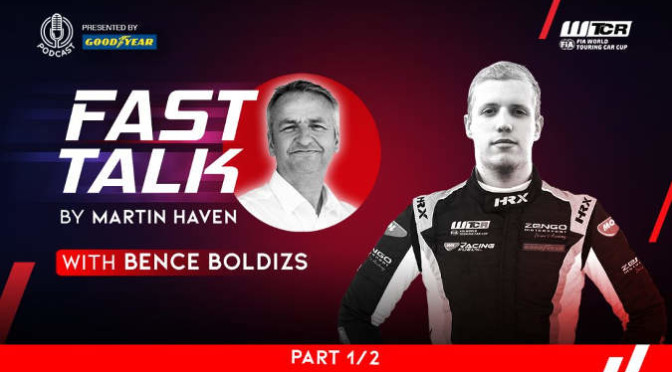 In 2005 Zengő Motorsport gave Norbert Michelisz, then an accomplished online racer, a test at the Hungaroring, his first of many big breaks. Fifteen years later, Bence Boldizs is preparing to follow in the wheel tracks of his illustrious compatriot with a season in the WTCR − FIA World Touring Car Cup, when he will contest the new Rookie Award.

But while Michelisz came to Zengő’s attention through his virtual exploits, Boldizs has impressed in real life, winning in the Zengő-conceived Hankook Racer Cup for Suzuki Swifts via success in various scholarships, before producing a “quite promising by the way” performance when he tested a CUPRA TCR for the Hungarian outfit, an achievement that has effectively earned him a WTCR ride in 2020.

“It’s a pleasure to be here, to race against these legendary drivers, to race with Zengő Motorsport,” Boldizs tells host Martin Haven in part one of his two-part WTCR Fast Talk podcast presented by Goodyear. “We all know Norbi started [with this team] and right now he’s the King of WTCR. I was really happy when he won the championship, it was an emotional day for every Hungarian.”

Boldizs’s WTCR experience is limited to a solitary test day with Zengő, but, as he tells Haven, he hopes that will change soon in light of the easing of some restrictions in certain countries.

“We have a lot more time to prepare of course [before the first scheduled race in Austria] and it would be better to be testing the car,” says Boldizs, 23. “We had only one test day but I really, really enjoyed it. This car is a beast and the result was quite promising by the way. We didn’t really try set-ups, we were just getting used to the car. We are looking forward to more test days and the start of the season.”

While his ‘real’ WTCR knowledge is currently lacking, Boldizs is contesting the Pre-season Esports WTCR Championship, which concludes at a virtual Sepang International Circuit this Sunday, 19 July. It’s giving him the opportunity to race against and to get to know some of his real WTCR rivals.

“Everybody is being nice and helpful,” Boldizs says of his fellow World Touring Car racers on WTCR Fast Talk. “Maybe because it’s early in the season and maybe during the season they may not be friendly to me. There are some legendary drivers competing.”

Boldizs is no stranger to meeting legendary drivers. As a three-year-old, his racing ‘debut’ no less, the Budapest resident met Zsolt Baumgartner, who remains the only Hungarian to race and score a point in Formula One.

“There was a kart race where everybody could try it but I was only three so my father wanted to participate with me,” Boldizs remembers. “The organisers said if we could fasten the belt together then we would be able to race but to be careful. We were sitting together in the go kart, me sitting on my father’s lap. He pushed the pedals because I obviously couldn’t reach them and my hands were on the steering wheel. It looked like I was turning but my father helped me. We finished in third position and Zsolt Baumgartner hung around my neck my first medal.”