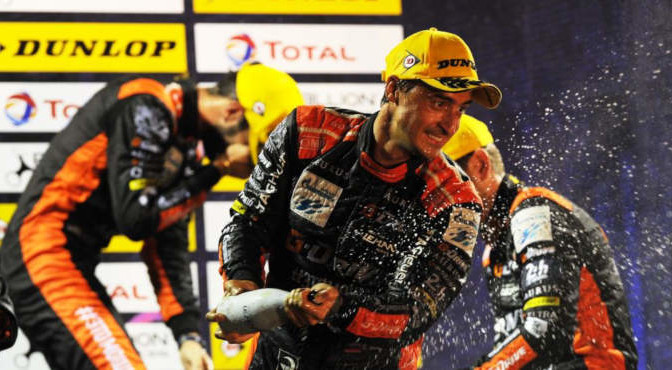 The no26 G-Drive Racing Aurus 01-Gibson took a dominant win in the 4 Hours of Barcelona, with Jean-Eric Vergne taking the chequered flag one lap ahead of the rest of the ELMS field. The no39 Graff Oreca took second place, with Tristan Gommendy passing the no30 Duqueine Engineering Oreca of Richard Bradley with less than seven minutes of the race remaining. The no37 Cool Racing Oreca took the final podium position, passing the no30 Oreca in the final minutes of the four hour race.
The no13 Inter Europol Competition Ligier of Nigel Moore and Martin Hippe took their first win of 2019, with Moore fighting his way to the front and then having to do it all again after being served a drive through penalty for a collision. The no17 Ultimate Norma was second, with Matthieu Lahaye passing the no2 United Autosports Ligier of Tommy Erdos in the final few minutes of the race.

The no51 Luzich Racing Ferrari F488 also dominated the LMGTE category with Alessandro Pier Guidi bring the car home well ahead of the no66 JMW Motorsport Ferrari and also ahead of most of the LMP3 grid.

Racing Into The Night in Spain
The 4 Hours of Barcelona was the first ELMS race to start in sunlight and finish in the dark. The race got underway with the no37 Cool Racing Oreca of Antonin Borga taking the lead from pole position holder Paul Lafargue in the no28 IDEC Sport Oreca, with Roman Rusinov in the no26 G-Drive Racing Aurus in third.

Mikkel Jensen in the no11 Eurointernational Ligier held the lead from pole at the start with the no10 Oregon Team Norma of Damiano Fioravanti in second. The no66 JMW Motorsport Ferrari of Wei Lu moved from 4th to the front of the LMGTE field on lap one, with the no60 Kessel Racing Ferrari of Sergio Pianezzola in second but the Italian retook the lead a few laps later.

The no43 RLR MSport Oreca of John Farano span off into the barriers at T5 which brought out the first of several Full Course Yellows to recover the stranded Oreca. Several teams elected to pit, including the leading LMP2 cars, with Roman Rusinov emerging ahead of the no37 and no28 Orecas in the lead of the race.

The no66 Ferrari was given a 10 second pitstop penalty for overtaking under yellow flags, which dropped the car back to third. The leading no60 Kessel Ferrari clashed with the no9 Realteam racing Norma at T1 and was handed a drive through penalty for causing the collision which put the no51 Luzich Racing Ferrari of Fabien Lavergne in the lead of the LMGTE class.

The second FCY was caused by another car spinning off into the gravel, so Roman Rusinov headed to the pits to hand the car over to Job Van Uitert. The Dutch driver was 15 seconds ahead of the no30 Duqueine Engineering Oreca.

The no3 United Autosports Ligier of Christian England was leading the LMP3 category, with Jens Petersen in the no11 Eurointernational Ligier in second.

At the 2 hour point of the race, the no26 G-Drive Racing Aurus was 31 seconds ahead of Nicolas Jamin in the no30 Oreca with Jonathan Hirschi in the no39 Graff Oreca in third. The no51 Ferrari, with Nicklas Nielsen driving, was now 27 seconds ahead of the no56 Project 1 Porsche of David Heinemeier-Hansson.

The no24 Panis Barthez Competition Ligier of Timothé Buret went off heavily into the tyre wall at T3 which brought out the safety car for 15 minutes. The no11 Eurointernational Ligier, which was now in the lead of LMP3 was smoking heavily from the rear of the car, which suddenly cleared.

At the restart Jonathan Hirschi in the no39 Graff Oreca was challenging Nicolas Lapierre in the no37 Cool Racing Oreca for 3rd place. Hirschi got ahead into T1, but Lapierre fought back and the two cars were side by side for several corners, with Lapierre eventually getting the upperhand.

Another FCY period was declared when the no11 Ligier spun off after contact with another car, the engine bay smoking. Jens Petersen was forced to retire the car and it was towed to a safe location. At the restart the no3 United Autosports Ligier of Mike Guasch was leading but was caught and passed by the no17 Ultimate Norma of François Herau.

With one hour of the race remaining the final FCY was declared to clear debris from an earlier collision. The no26 Aurus was now leading by nearly a minute with Jean-Eric Vergne at the wheel and pulling away from the no30 Duqueine Engineering Oreca of Richard Bradley.

The no17 Ultimate headed to the pits which put the no3 and no2 United Autosports Ligiers at the head of the class, with Nigel Moore in the no13 Inter Europol Competition Ligier closing fast. Moore overtook both cars to take the lead but was served a drive through penalty for causing a collision with the no10 Oregon Team Norma.

Moore served the penalty and rejoined in third place. Tommy Erdos took the lead when the no3 Ligier ran wide, allowing the no13 Ligier into second place. Moore soon caught and passed Erdos to retake the lead, which he held until the chequered flag. Matthieu Lahaye moved back up the order and took second place with seven minutes left on the clock, with Tommy Erdos bringing the no2 United Autosports Ligier home in third.

The no51 Luzich Racing Ferrari with Alessandro Pier Guidi at the wheel, took the LMGTE victory, 41 seconds ahead of the no66 JMW Motorsport Ferrari of Jeff Segal and the no55 Spirit of Race Ferrari in third. The no83 Kessel Racing Ferrari made it 1-2-3-4 result for the Italian manufacturer, with Rahal Frey crossing the line 1 lap behind the lead car.

The no26 G-Drive Racing Aurus-Gibson finished teh race 1 lap ahead of the rest of the field led by the no39 Graff Oreca after Tristan Gommendy passed Richard Bradley’s no30 Duqueine Engineering Oreca in the last few minutes of the race. Antonin Borga was able to pass the no30 Oreca to claim the final podium position in the no37 Cool Racing Oreca-Gibson.