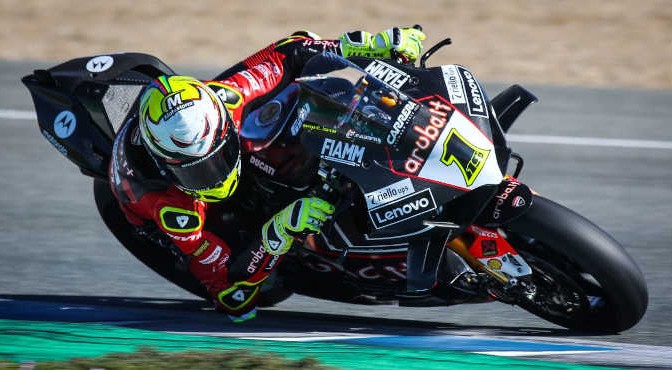 Day 1 during testing for the MOTUL FIM Superbike World Championship at the Circuito de Jerez – Angel Nieto was a busy affair as teams and riders got their first 2023 running under their belt. 2021 Champion Toprak Razgatlioglu (Pata Yamaha WorldSBK) topped the times ahead of reigning Champion Alvaro Bautista (Aruba.it Racing – Ducati) by two tenths of a second, with Bautista crashing in the afternoon, while rookie Danilo Petrucci (Barni Spark Racing Team) shone brightly on his WorldSBK debut.

Three rookies were taking part in the Jerez test as they got adjusted to new surroundings, teams and bikes. Petrucci took sixth spot at the end of the day with a 1’39.790s, just over a second slower than Razgatlioglu. Dominique Aegerter (GYTR GRT Yamaha WorldSBK) was ninth fastest on his first day in dry conditions with the Yamaha R1, lapping in 1’39.934, as he worked on linkage, swingarm and electronic components, with teammate Remy Gardner close behind in 14th place and six tenths back from Aegerter. Baldassarri (GMT94 Yamaha), learning the Championship and bike along with his team, was the lowest-placed rookie with 19th place as he took to the Yamaha R1 for the first time.