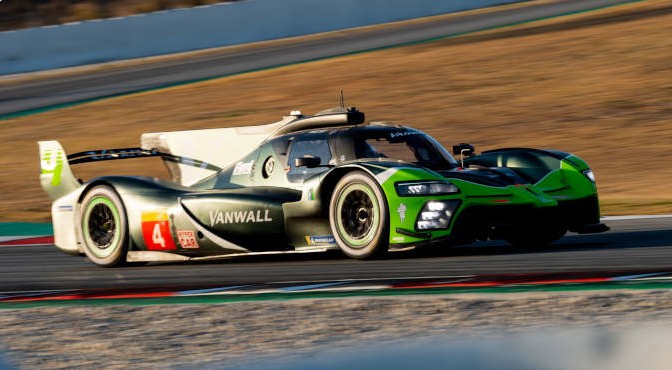 Last December Esteban Muth had the opportunity to drive the Vanwall Vandervell 680 LM Hypercar at the Catalunya-Barcelona and Motorland Aragon circuits. These tests gave Muth the chance to work closely with the team and demonstrated his natural talent and potential.

Driving a LM Hypercar is a logical progression for Esteban’s career. Following a successful karting career by crossing the finish line in 2nd position in the CIK FIA World Championship, the young Belgian moved on to single-seaters, including Formula 4 France, Toyota Racing Series New Zealand, Eurocup Formula Renault and F3 Japan, before moving to GT4, and GT3 cars in the DTM.

Estaban was forced the end his 2022 season, when some medical issues interfered with the progam. Estaban Muth started preparation for his 2023 campaign with the Vanwall test outings last December:

“It is clear that endurance racing is on the up and that for any driver who wants to shine on the international scene, the FIA WEC is a discipline that cannot be ignored, said Esteban. With the introduction of the FIA Hypercar regulations the future looks bright! The renaissance of a brand like Vanwall is just something very special. It is an absolute pleasure to be invited to join this team as official test and reserve driver. Obviously my hope is to find myself one day in a race at the wheel of this superb Vanwall Vandervell 680. It is the beginning of a great adventure, which I will combine with another programme.”

As part of the Floyd Vanwall Racing team, Esteban will be immersed with the team both trackside and at the factory in Greding. He will work closely with various departments to maximise his integration with the team.

Boris Bermes, Head of Operations at Vanwall Racing has kept close tabs on Esteban and is incredibly happy to welcome him into the team, stating: “We’re delighted to welcome Esteban to our team. Esteban’s natural ability behind the wheel convinced us and he will demonstrate what he’s capable of in the years to come. We look forward to working closely with Esteban to support his development as a driver.”

In addition to this collaboration with the Vanwall Racing team, Esteban will announce his official 2023 programme in the next few weeks, which will include another high-level race involvement.