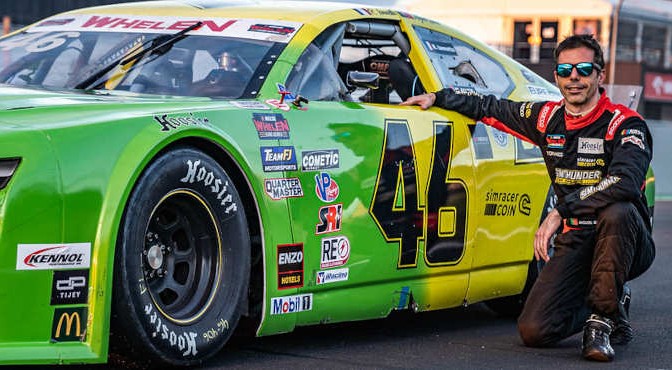 A special day awaits Miguel Gomes this week as he will be participating in the ARCA Menards Series pre-season test at the Daytona International Speedway. EuroNASCAR’s first full-time Portuguese driver was announced by ARCA to be one of the sixty-one drivers listed as participants for their annual pre-season test earlier this week. Gomes has driven the high banks of Daytona many times in the virtual environment thanks to his iRacing background, but with the ARCA test he will be taken on the legendary Super Speedway oval in person for the first time.

Gomes is set to work with Fast Track Racing, a team with a well-established presence in the ARCA Menards Series in recent years, for his date with destiny at Daytona. Gomes will be joined by twelve other drivers at Fast Track during the pre-season test, six of whom were selected to participate via ARCA’s “Road to Daytona” program. Other notable names include famed actor Frankie Muniz, who will be taking part in the test as part of the build-up for his debut ARCA season this year.

“It is a big dream for me to race at Daytona and being able to participate in this ARCA test is already amazing!” said Gomes on the upcoming ARCA test. “Alongside my background in the NASCAR Whelen Euro Series, I have oval racing experience from the European Late Model Series and I also raced in Rockingham, the 1.5 mile oval in the UK, but racing at a super speedway like Daytona will be the first time for me. The only way I can prepare is in the simulator. I’ve raced there many times in iRacing and look forward to seeing how it is in real life.”

Gomes made his NASCAR Whelen Euro Series debut in 2021 when he signed a contract with Marko Stipp Motorsport to compete in the EuroNASCAR 2 Championship. His first season was a year of learning for the Portuguese, but he was still able to secure third place in both the Legend Trophy for drivers aged 40 and over and the Rookie Trophy for drivers making their first steps in the highly competitive EuroNASCAR Championship.

He returned to Marko Stipp Motorsport in 2022 after signing a contract extension with the team during the off-season. The 41-year old driver began his season on a high note after finishing ninth in the season opening race at Valencia, equaling his best finish from last year. Gomes would score two more top-10 finishes and remained in contention for the overall victory in Legend Trophy right until the Finals at Grobnik, where his hopes for the win in the special classification was sadly dashed due to a double non-finish.

“We’re very happy for Miguel to have this opportunity,” said Marko Stipp. “We support him all the way as we know it has always been a dream of his to race in the US. It’s great that with Fast Track Racing we could suggest a renowned team to him through our contact to team owner Andy Hillenburg. I’m sure it will be a great experience for everyone that at the same time will strengthen the US-European bonds.”

Gomes is currently working to secure another contract extension with the German team for the 2023 season, which will begin on 6-7 May with the Valencia NASCAR Fest at Spain’s Circuit Ricardo Tormo and is set to feature six championship rounds on six of Europe’s best circuits. All qualifying and race sessions for the 2023 season will be broadcast live on EuroNASCAR’s YouTube channel, Motorsport.tv and several TV services from all round the world.