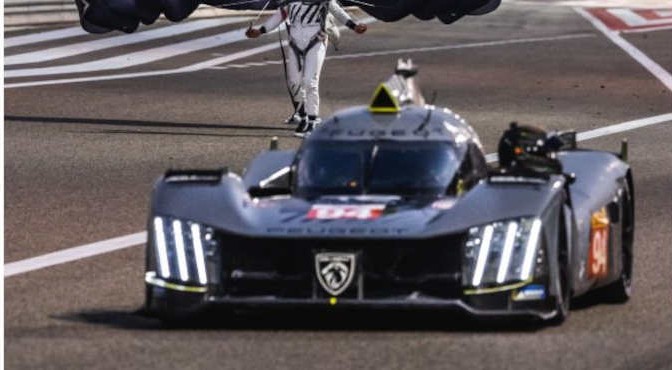 In Bahrain, scene of the final round of the 2022 FIA World Endurance Championship, PEUGEOT produced a video featuring Team Peugeot TotalEnergies driver Gustavo Menezes, using a stunt to present its new slogan, ‘Allure Born to Race’. High above Bahrain International Circuit, the American parachuted out of a Bahrain Ministry of Interior Police Aviation helicopter before landing on the track and driving away in PEUGEOT’s 9X8 Hypercar.

The operation allowed Menezes to indulge his two core passions – motorsport and skydiving. “When you do what you love, nothing can hold you back!” he enthused.

During the jump, Jokke Sommer – a true legend of the skies – captured this extraordinary footage. “Jokke is a good friend and a real pro, capable of the kind of insane jumps that I would never attempt, and I have the utmost respect for what he does. He’s one of the very best, so it was a real privilege to be able to jump with him,” says Menezes, a professional racing driver – competing in Team Peugeot TotalEnergies’ #94 9X8 – and also the holder of a skydiving licence. Here, the American talks us through his spectacular adrenaline-fuelled hobby.

Gustavo, when did you begin doing skydives?

“A few years ago, I remember being struck by some videos I saw about skydiving, which really gave me the urge to try it out for myself – not that I needed very much encouragement, to be fair! Since my first jump in 2019, I’ve been lucky enough to learn from some of the very best instructors around. I’ve travelled all over the world and parachuted above some incredible places. I love the buzz that skydiving gives you; it’s similar to the feeling I get when I head out for a qualifying lap in the 9X8.”

As a racing driver, your goal is clearly to win. What is your objective when you skydive?

“In my professional life, yes, my motivation is obviously always to win. That’s both an objective and the greatest reward. When I skydive, my favourite moment is exiting the plane or helicopter. That split-second when I jump, I leave everything else behind. It’s exactly the same feeling and adrenaline buzz when I drive out of the pit-lane in the 9X8 in qualifying, which is the ultimate test of raw speed in a race car. You are completely focussed on that single goal – exploiting the full potential of the car in order to unlock every last thousandth-of-a-second. They are very similar in that respect. The major difference in my case is that when I’m in the car, I’m in a competitive environment whereas when I skydive, it’s all about the enjoyment. When you jump with friends, you have a vision of what you want it to turn out like and when that materialises, it feels very satisfying.”

A racing driver clearly needs to train, but how do you prepare yourself for a skydive?

“Like you would do for any sporting activity, you take lessons that enable you to progress step-by-step. You learn about the wind, the deployment of the parachute, how you need to position your body and how to fly. You practise in a wind tunnel before your first actual jump, alone but connected via a radio in your helmet to an instructor who guides you through aspects such as altitude, the angles you should take and how to open the parachute.”

How long does a jump last, and what is faster – freefalling or the acceleration of the 9X8?

“The acceleration of the 9X8 and the speed when you’re freefalling are actually pretty similar, and you reach almost the same top speed. The duration depends on the altitude, which determines how long you have between leaving the plane and deploying your parachute. That can vary from 30 seconds up to a minute. The jump itself calls for intense concentration, but when you open the parachute, everything suddenly becomes much calmer. You are able to take in the view and everything around you as you float serenely down towards the ground.”

Is it easy to find the limits?

“As a sportsperson, you are always exploring the limits. You try to achieve the maximum by pushing right to the ragged edge – that is a hallmark of the very best. This stunt proves that when you enjoy what you do, anything is possible…”

For PEUGEOT, Gustavo Menezes perfectly embodies the key values of both the brand and its customers: emotion and excellence, allied to the desire to add a little allure to everyday life.

Phil York, Head of PEUGEOT Marketing & Communications, commented: “When I first heard about this stunt, I must admit, I thought it was a bit of a crazy idea for one of our drivers to jump out of a helicopter and land on a racetrack, but I also absolutely loved it! The film demonstrates how Allure is much more than just a word for PEUGEOT – it is inherent in the brand’s DNA. We want to push the limits and go that little bit further, but at the same time we want to have fun – and that is precisely what we have achieved with this unique motorsport film. Our PEUGEOT 9X8 Hypercar completely reflects our Allure Born to Race philosophy. I would like to thank Gustavo Menezes for performing this wonderful feat – it is the ideal showcase for this blend of excitement and appeal.”

In order to pull off the stunt successfully, the support and assistance of the FIA World Endurance Championship, Bahrain International Circuit, the Bahrain Ministry of Interior’s Police Aviation department, Major Abdulla Alabsi and Jokke Sommer were invaluable. Without them, none of it would have been possible. Peugeot and Team Peugeot TotalEnergies extend their sincere gratitude to them all.