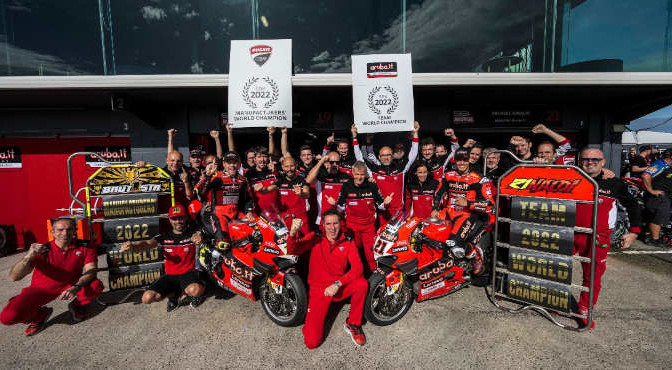 The Italian manufacturer and their riders highlighted the performance and reliability of the Ducati Panigale V4R, whilst it also means the Bologna-based manufacturer have now secured the Manufacturers’ Championship in both MotoGP™ and WorldSBK. It is the first time in their history that they have achieved this, making it a record-breaking season for WorldSBK’s most successful manufacturer.
Luigi Dall’Igna, General Manager of Ducati Corse:
“After Alvaro Bautista’s win in the World Superbike Riders’ Championship, being able to get the Manufacturers’ Championship as well is for us a further source of pride. It is an important goal, which repays all the efforts and the work done with great commitment, passion and dedication by the men and women of Ducati Corse. It is our eighteenth Manufacturers’ title in WorldSBK and it is the first one obtained with our Panigale V4R, a bike that has given us great satisfaction since 2019. As always, however, special thanks go to all the Ducati riders who were able to interpret it at its best and who, with their results, have allowed us to achieve this historic success. Congratulations also to the Aruba.it Racing – Ducati team for winning the title of best WorldSBK team this season.”