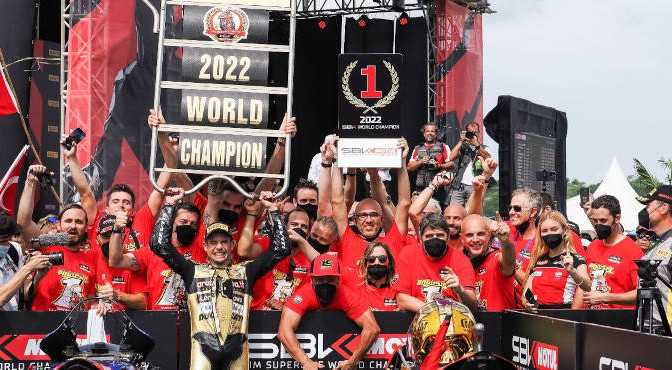 P1 – Toprak Razgatlioglu (Pata Yamaha with Brixx WorldSBK)
Razgatlioglu won three races out of three in Mandalika. He took the advantage over Bautista to claim the win with a 1.230s advantage over the newly crowned WorldSBK Champion.
He remains second in the Championship standings with 462 points.
“For me it’s been an unbelievable weekend, in a Muslim country. Three wins… This is a very good weekend for me, I’m really happy. Congratulations to Bautista and Ducati. It was a really good season because we are fighting almost every race. We lost the Championship, but I tried my best. I won three times, and this is positive for me. We have a lot of respect. We are fighting but outside the track, we are talking to him like friends. I’m very happy for him to take the Championship this year, and also for him to ride the Ducati many years later. It’s a very good day for him. I remember it for me last year. I saw Alvaro in the gold leathers and I’m looking again because it was like my suit, very similar! Congratulations again, I think today is a Ducati day.”

P2 – Alvaro Bautista (Aruba.it Racing – Ducati)
Bautista was crowned WorldSBK Champion with 533 points after his second place in Race 2.
“It’s incredible, I’m so happy. It’s a dream come true, especially after the last two years and all the difficulties. I want to say thanks to everyone who trusted me, to give me this chance to fight for good places and we got the Championship at the first time trying. Today was the first time I felt a bit nervous or stressed, but it was in Race 2 on the grid before the start. I tried to manage the emotions and when I was in first, I was making a lot of mistakes because I had too many thoughts in my head! I just preferred to say second behind Toprak, but he was very strong, so I could just follow him. So happy.”

P3 – Jonathan Rea (Kawasaki Racing Team WorldSBK)
Battling in front in the early stages of the race, Rea finished in third position in Race 2. He crossed the finish line 2.825s behind Razgatlioglu.
He stands in third place in the standings with 434 points.
“Sunday has been really positive. Like I said yesterday, I was quite content and satisfied with being on the podium. We were quite far from the race win. Today we were able to really close that gap. I could fight with Toprak for the Superpole Race. The rhythm was incredibly fast. So, I’m happy to be P2 there. In Race 2 today I felt something in the middle of the race. I couldn’t go, I was catching the guys at the front, and I felt like this could be good but again, last laps I just really struggled to get the best from my bike. Things were moving around a little bit. I just had to close the gap. My confidence was dropping because I was riding completely on the limit. Satisfied, as I’ve said we’ve made a good step. I want to thank my team for making a good step from yesterday.”

P4 – Andrea Locatelli (Pata Yamaha with Brixx WorldSBK)
After claiming his second podium of the season in the Tissot Superpole Race, Locatelli finished in fourth place in Race 2.
He stands in fifth place in the Championship standings.
“I’m really happy about today because in the end, after yesterday, we understood a lot. We prepared very really for Sunday. Then, this morning it was really important to try to push in the Tissot Superpole Race. But I thought I could do it, so I trusted myself and I tried to give the maximum. Then, we started again from P3, so it was important. It was a really good Race 2. We fought a lot with Alex. It was really nice. It’s a very important weekend for me and it’s been positive. Now we have the last round to try again to push. I think I want to try to get some podiums because it’s one of my favourite tracks. I have a lot of motivation to finish the season.”

P5 – Axel Bassani (Motocorsa Racing)
Bassani was fifth in Race 2, finishing 8.205s behind the winner.
He was crowned Best Independent rider in the Tissot Superpole Race. He stands in seventh position in the Championship standings with 230 points after Race 2.
“Finally, I won the Independent Riders’ Championship. I’m really happy. Today, we made a lot a really good steps with the bike. Yesterday, I really couldn’t ride like I wanted. But today I felt good with the bike, I could stay with the top three guys. I only want to enjoy the moment. It’s really hot here so it’s difficult to have a normal race. You have to manage yourself physically, to stay focused on the race. I felt on fire. But anyway, we finished the race, we did our job!”

P6 – Scott Redding (BMW Motorrad WorldSBK)
Redding finished in fifth place in both the Tissot Superpole Race and Race 2. He was the leading BMW rider.
He is eighth in the Championship standings.
“The weekend was difficult with the track conditions. It was obviously hard for us to set the bike up because the track was changing all the time. Today was better for me. In the Superpole Race, I felt good with the bike and I was able to get a good result. And in the main race this afternoon, I felt pretty good, but I went off track again, trying to make an overtake and I lost the front group. I had a strong pace at the end of the race, I was catching, I passed two or three guys. The pace was there but I made another mistake. I was angry at myself for that because the pace was enough for the fourth position today so I could have battled with them. But we keep pushing, we keep trying and are looking forward to the next race in Phillip Island.”

The the Grand Ridge Brewery Australian Round will take place from the 18th to the 20th of November at the Phillip Island Grand Prix Circuit.