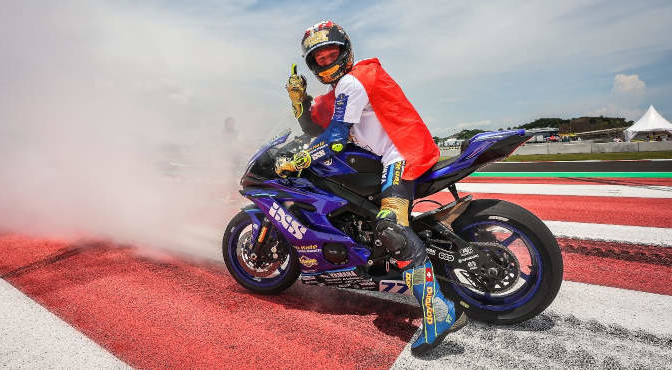 The Swiss rider became the third WorldSSP Champion to claim two consecutive titles
With 15 wins and 17 podiums claimed this season, Dominique Aegerter (Ten Kate Racing Yamaha) retains his crown and is the 2022 WorldSSP Champion after finishing fourth at Mandalika.

Aegerter imposed his strong race pace from the season-opening round and won the title race having been under Lorenzo Baldassarri’s (Evan Bros. WorldSSP Yamaha Team) pressure during 2022’s entirety. The 2021 Champion took the lead of the Championship standings after Aragon Race 2 and, despite Baldassarri having been able to reduce the gap to five points after Magny-Cours Race 1, Aegerter resisted the Italian’s charge to dominate the following races and he claimed the title with a round to spare.

Aegerter joined the WorldSSP paddock in 2021 after a successful career in the 125cc and Moto2™ World Championships, as well as the MotoE™ World Cup. In 2014, he became a Moto2™ Grand Prix winner at the Sachsenring. In his first season in World Superport, he claimed the title, making him the favourite for more success in 2022. This year, he continued to compete in both the FIM Supersport World Championship and the MotoE™ World Cup, and he doubled up on titles this season as he claimed both the MotoE™ and the WorldSSP crowns.

Aegerter becomes the third two-time WorldSSP Champion, with Sebastien Charpentier achieving it in 2005 and 2006 and Kenan Sofuoglu in 2015 and 2016; it’s the first time that the same Yamaha rider has won back-to-back titles in WorldSSP. With 15 wins in 2022, Aegerter also becomes the rider with most wins claimed in a single season in WorldSSP.

The 2022 WorldSSP Champion will graduate to WorldSBK with the GYTR GRT Yamaha WorldSBK Team in 2023. Aegerter has experience of Superbike machines in his career after taking part in the Suzuka 8 Hours race on several occasions, claiming two podium finishes.
Dominique Aegerter, Ten Kate Racing Yamaha:

“We did a fantastic job this year. Three races before the end, we got the second World Championship. We also got the MotoE™ title. We had 15 race wins, 17 podiums and my worst finish this season was a fourth position. We achieved really great things this season, many records, but our goal was to fight for the Championship. We already had over 60 points advantage in the middle of the season and then somebody crashed me out, a small mistake, and we went down to five points. We fought back until it was 72 points and now, three races before the end, we win the Championship. It’s a big achievement. It is not possible alone; we are a big family and the team helped me to do this. We had a fantastic season. For me, a second dream comes true being World Champion again. I want to dedicate this Championship to my family, my friends, to all the sponsors, the Ten Kate Racing team and Yamaha. They helped me to be there and I hope, next year, we can continue in a good way. I’m feeling ready to jump up to WorldSBK and I can’t wait to ride it for the first time in December with the GRT Yamaha team.”