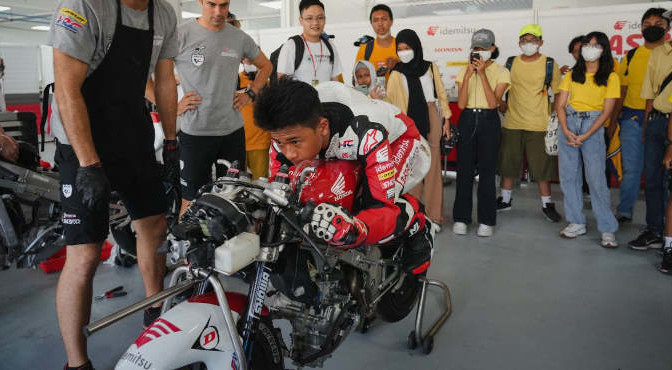 It’s the penultimate round of the 2022 MOTUL FIM Superbike World Championship season and the title is on the line this weekend. Even though a crowning moment could take place in both WorldSBK and WorldSSP, there was plenty of talk about bike upgrades at Honda, pressure talk amongst the titanic trio and more gossip from Thursday media debriefs.
Alvaro Bautista (Aruba.it Racing – Ducati): “I don’t feel nervous… it doesn’t matter if it’s here or Australia”

“Sincerely, I don’t feel nervous. I’m happy to come back here; I love the layout of the track and with the fans, they love the racing. It’ll be our first time with Ducati, so we have a lot of work to do, especially on Friday for the reference, setup and gearing. We have to work like we did at San Juan. We’ll need to put some rubber on the track too; I think it will be a busy weekend for me. I don’t have time to think about the Championship or match-point; I think it’s better to think about the real problems we have and to work as best as possible. In Valencia, Ducati won the Riders’ Championship in MotoGP™ so it’d be nice to make it a double. It doesn’t matter whether it’s here or Australia, the important thing is that we get it.”

Toprak Razgatlioglu (Pata Yamaha with Brixx WorldSBK): “There’s no pressure or stress for me, maybe for Alvaro”

“I’m very happy to come back here because I have good motivation and good memories from last year when we took the title; it was an unbelievable day. Now, we come back for the win as the Championship isn’t easy for me. We’ll just focus on doing a good race. For the Championship, we have a big gap but I’m not waiting for Bautista to crash. My goal is to try for three wins. There’s no pressure or stress for me; maybe for Alvaro, it’s starting as he is close to the Championship. In my opinion, he won’t take risks this weekend.”

Jonathan Rea (Kawasaki Racing Team WorldSBK): “We’ve improved since last year, the problem is everyone else has too”

“We’ll try to bring last year’s positive vibes here this year. We’ve improved since last year, the problem is everyone else has improved too. We need to see where we stack up tomorrow; with the track being resurfaced, Friday will be about understanding conditions, getting laps and cleaning the track, not making big setup calls. I’m empty-headed about any goal this weekend; thinking about the Championship is a bit ridiculous now. Alvaro has done an incredible job. I’ll focus on myself and I’m going out to do the best I can this weekend. It’s nice for Tom Sykes to come back to the Championship as he’s an incredible competitor, but in terms of development, he’s such a unique rider that there’s not much resemblance to how I ride or develop the bike. I’ll continue working with my team and especially Alex and our crews, to develop the ZX-10RR through the winter.

Iker Lecuona (Team HRC): “We have something new… fighting for a podium is the target”

“It’s the last new track for me this year but I don’t know what to expect! Everyone tells me the weather changes a lot. The track looks good and fun but a bit dirty, so we’ll try to learn quick so that we can fight at the front. It’s true that in Argentina, I felt something special. The bike was almost the same, but I could go very fast; I’ll try to repeat this, and I think we have the level for the podium. I think we can do the last races very well. We have something new on the bike, it’s the same frame but something to help with the next stop. Trying to fight for the podium is the target.”

Xavi Vierge (Team HRC): “The upgrade will help us in order to make another step”

“I think after Magny-Cours, we’ve had some good progression and I felt good with the bike and competitive. I started to enjoy the riding. The upgrade will help us in order to make another step; everything is more or less the same, we just have more adjustment, so we will try to take the maximum capacity from our package and see if we can make a step forward to fight as strong as possible.”

Michael van der Mark (BMW Motorrad WorldSBK Team): “It’s not been easy to get back up to speed”

“It’s not been easy to get back up to speed. The speed was not that bad but getting everything together and being as consistent as before is quite tough if you’ve been out for a long time. We made progress, stayed calm. I think in the Superpole Race in Argentina, we had a really good pace. I was a lot faster than I was before. In Race 2, I was OK. I was quite fast, and it was one step forward, but we have to stay calm and make sure we finish in the top ten.”

“I have the same offer with the same team, with MIE Honda, but I am still thinking about whether to stay or not. It looks like it’ll be interesting next year. I’m very happy to stay here in the paddock and I try to keep pushing and to talk more with the team to see what the best way is for me is for next year. I want to be competitive. I want to show at least something in the front of the field, not to stay like this; now, we’re still struggling because we don’t have any new parts to improve the bike. We try to just use the experience I have, and the team gives their best. We are on the limit at the moment to go faster. I hope, next year, we have a different package so we can have better results, or similar, to the factory bike. A factory rider finished on the podium but it’s mostly top seven, top eight they’re fighting for. I hope I can have this kind of journey.”

“The season was nearly perfect. We had only one weekend where we didn’t score any points, and in the other weekends we were nearly always on the podium. Looking forward to next year. I will go testing with the GRT Yamaha team in December at Jerez. Looking forward to getting to know the team and the bike and then, of course, see where I will stay. My goal is to get as fast as possible and improve every race.”

The Pertamina Mandalika International Street Circuit has been extensively resurfaced following WorldSBK’s first visit there in 2021 and MotoGP™ heading there this season while more works have been completed ahead of WorldSBK’s second round there.

At Turn 5 and Turn 6, kerbs have been amended with drainage upgraded and this was the first phase of the works to be completed. Some run-off areas have been extended and then, after this, the resurfacing work got underway at the 4.3km circuit.

More than 5,000 tonnes of asphalt make up the Mandalika circuit with more than 200 people involved in the works, with the works designed to improve the flatness of the circuit as well as water drainage; aiming to avoid standing water on the circuit in the event of heavy rainfall. In order to ensure the best possible job, the circuit was milled, in sections, before being checked with a laser scan to help understand the work required in each section. More than 56,000 sqm of track area were milled during the works. The works were led by Italian company Dromo and track designer Jarno Zaffelli. The aggregates for the asphalt were also sourced from Rinjani volcano to increase the sustainability of the works.

Dorna WSBK Organization welcomed students from Lombok schools in collaboration with Berdaya Project, a local non-profit educational project, on the eve of the Pirelli Indonesian Round. The group of 13 students, aged from 14 to 18, discovered various aspects of the organisation of the Indonesian Round, such as the inner workings of race direction and TV production at WorldSBK rounds. They also got to a behind the scenes look to the Idemitsu Asia Talent Cup, the series run by Dorna to promote emerging young riders from the region, as Mandalika will also host the final round of the cup.