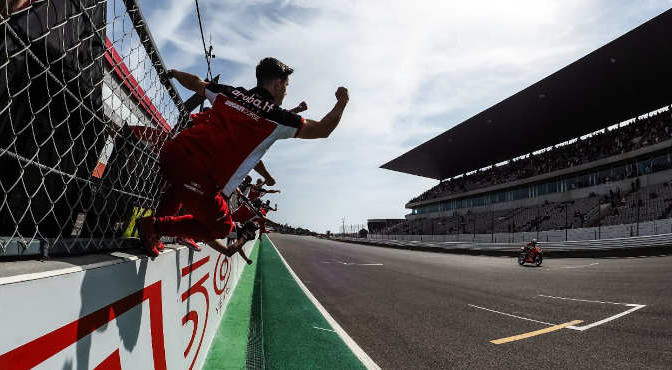 P1 – Alvaro Bautista (Aruba.it Racing – Ducati)
Bautista claimed his 28th WorldSBK victory as he finished 2.256s ahead of Razgatlioglu.
His Championship lead extended to 56 points over the Turkish rider.
“For sure, it has been three amazing races with a lot of fighting at the front. Yesterday, I needed the last six laps of the race to get to Toprak and fight for victory. In the Superpole Race, I knew it was maybe difficult to beat Jonathan and Toprak because they were very fast. I think they were a bit better than us at this track with these conditions. This morning, I was very determined, and my plan was to stay with them because I can finish with them, that means I have the chance in the afternoon to fight for the victory. In the end, I was quite fast in the morning as well. I could be with them, especially with Toprak. He had a really incredible pace in the morning. In the afternoon, I had a better position on the grid. I made a normal start and I lost position to Jonathan, but I was there. When Jonathan was in front, Toprak was behind him just saving the tyre life. I think Jonathan was struggling a little bit more than Toprak to push. I decided to take the lead and increase the pace, make the others force their tyre. I’m happy because the last laps, even if Toprak tried to overtake me a couple of times, he was struggling more so in the last few laps he stayed away.”

P2 – Toprak Razgatlioglu (Pata Yamaha with Brixx WorldSBK)
Razgatlioglu was second in Race 2 as he claimed his 75th podium in WorldSBK.
He is second in the standings and has a 26-point advantage over Rea.
“In the afternoon, Alvaro improved and came back very strong again. It wasn’t easy to pass him in Race 2, but I kept fighting for the win. In the last three laps, the front tyre started to lock. I said second place was enough. Every lap, I caught him, and, on the exit of the last corner, he got ahead again on the straight; his bike is very fast. We finished second and we take good points for the Championship.”

P3 – Jonathan Rea (Kawasaki Racing Team WorldSBK)
Rea completed the Race 2 podium. He finished 4.758s behind Bautista and 2.502s behind Razgatlioglu.
He remains third in the Championship standings, with 366 points.
“I’m a little be disappointed with the results. I really came here wanting to try to get a race win under my belt but no regrets. I did my best. I got everything out of my ZX10RR. My team worked incredibly well. Race 2 I enjoyed a lot, I was riding on the limit to be there. I got to the front and tried to relax to control the tyre a little bit. But when Alvaro came by, his pace was really fast. Some areas to really improve when the grip level just drop with our bike.”

P4 – Michael Ruben Rinaldi (Aruba.it Racing – Ducati)
Rinaldi was fighting for a podium place but dropped back from the lead trio, finishing in fourth place.
He stands in fourth place in the standings with 323 points.
“It’s been always an improving weekend. Unfortunately, yesterday morning, during FP3, I couldn’t ride because of a technical issue. It ruined our first race a bit because I made the wrong tyre choice for Race 1. But today was a different story. We tried to do a good job in the Tissot Superpole Race which allowed us to start from fifth position for Race 2. The pace was amazing. I tried to stay with the top three guys. I stayed there until five or six laps until the end because when the tyre dropped, I could be fast enough to stay there. So we missed something. But you know, it’s another track, the pace was amazing.”

P5 – Alex Lowes (Kawasaki Racing Team WorldSBK)
Lowes was battling with Rinaldi, with the Italian taking the advantage and the British rider finishing in fifth place.
A top five finish meant Lowes recovered sixth place in the standings.
“To be honest, I felt quite good in that last race today. We made a small change on the front of the bike. Apart from when I had a fuel tank of fuel, I was struggling with the front locking a little bit but apart from that, I felt really good. But unfortunately, my pace was not as fast as the guys at the front. That was incredible the pace they had. I was still able to make low 1‘41 on lap 15, 16 and I was losing ground so respect to them! The tyres still haven’t changed much since last year and the pace was really, really impressive. I missed a little bit to go with these guys but a great weekend, a great qualifying, a good Race 1, Superpole Race was strong. I was really close to and battling with Jonathan. Like I said I missed a little bit at the start of the last race with a fuel tank of fuel. And at the end I was coming back towards Michael but we run out of lap.”

P6 – Andrea Locatelli (Pata Yamaha with Brixx WorldSBK)
Locatelli completed the top six, finishing almost seven seconds down on Lowes after 20 laps.
The Italian rider remains fifth in the Championship standings, 36 points behind Rinaldi and seven points ahead of Lowes.
“It was another strong race. The rhythm was really fast. I think I lost the gap immediately after the second or third lap when Bassani crashed. I lost the possibility to stay with Lowes. And then I was losing 0.2s or 0.3s every laps. But in the end, it was another great and positive weekend. We have good confidence with the bike. We know what we need to do to around the bike. We have more info now. And also, we were stronger here than in Barcelona. This is positive to look forward and to prepare the next races. We bring some points home so I’m happy about this.”