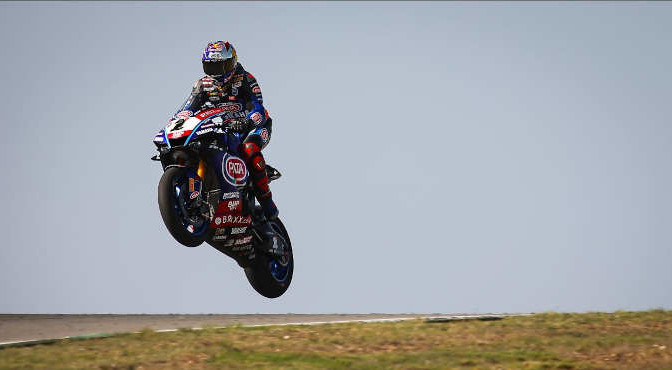 Taking flight and lifting off, the reigning World Champion really was on another level
Friday highlights – WorldSBK

P1 – Toprak Razgatlioglu (Pata Yamaha with Brixx WorldSBK)
Despite missing 10 minutes at the start of FP2 due to brake issues, Razgatlioglu topped the combined results.
He was 0.245s quicker than Michael Ruben Rinaldi with a best time of 1’40.720s.
Razgatlioglu was the fastest rider in Sector 2 and 3 but was the 14th fastest in the final sector.
“For me it’s a very good Friday because we started very strongly. I’m really happy. We tried different setups but now we are ready to race. In FP1, I jumped for 21 meters. For me it’s fun and I’m really happy for this. In FP2, we had brake problems because we used new parts and I felt some vibrations. We changed the disk and finally everything is ok. After, I saw very good lap times with the SC0 tyre and also the used tyre. After that, we tried a race simulation. We tried different tyres and finally we know which tyre is better for the race. Today is a good day. I followed Jonny and I had different tyres but once he saw me, he closed the gas … and then followed me! I saw some sectors where he was fast, and me too. Tomorrow the Superpole will be important for me. In Race 1, I will be fighting for the win again because I love this track. This year I’ll try for three wins.”

P2 – Michael Ruben Rinaldi (Aruba.it Racing – Ducati)
Rinaldi finished second overall after FP2 thanks to his fast lap set in the morning session.
He was the lead Ducati rider on Friday at Portimao with Bautista in fifth.
“This morning was pretty good. This afternoon we worked more to understand which tyre we will use tomorrow and Sunday. I’m pretty happy. We didn’t improve with the new tyre … which is strange. We need to understand how to improve. But apart from that, it was a pretty consistent Friday and I’m pretty happy with the feeling with the bike.”

P3 – Garrett Gerloff (GYTR GRT Yamaha WorldSBK Team)
Gerloff was third, 0.362s behind Razgatlioglu, with his best time claimed in the morning session.
“Friday was not too bad, it was a decent start. I was happy to be within the top three in the first session for sure. Track conditions were pretty prime. I’m a little bit disappointed because we’re struggling when the track temperature goes up. We made an improvement in the last part of FP2 but it’s just really difficult to get the power to the ground and get the bike to turn when the temperature goes up. This afternoon we were focused on the race pace and race distance. Lap time wasn’t the first concern, but I feel like we could go faster. We have room to improve and that’s what were going to be working on tomorrow.”

P4 – Jonathan Rea (Kawasaki Racing Team WorldSBK)
Rea finished in fourth place in the combined standings. He was 0.476s behind Razgatlioglu.
He was the fastest rider in the first sector, but, like Razgatlioglu, he was struggling in the last sector and was the 16th fastest rider in this short sector.
“It was a positive day. We ran through the tyre options to try them all and also understanding the track. I always love riding here. It’s quite challenging as a rider. You have to make a lot of special inputs with the bike, you’re almost massaging it around the circuit because it’s so undulating. Enjoying that challenge and working with the team to find an optimum setup for tomorrow. Tried to do longer runs on tyres to understand where the tyre drop would be and how we can manage that. We achieved the targets for today and look forward now to the Superpole tomorrow to try and qualify on that front row. There’s two options I feel like we can use, both SC0s as the race tyre. I was quite consistent and fast with both, although I didn’t really put a strong lap time, a time attack, together but consistency wasn’t too bad. We’ll just check that to understand the data to understand both FP1 and FP2 where it can be 8-10 degrees difference on track, so it’s hard to compare. We need to see what temperatures we will have tomorrow, understand how the bike behaves on each tyre and make a good choice from there.”

P5 – Alvaro Bautista (Aruba.it Racing – Ducati)
Bautista improved his overall fastest time in FP2 and worked on race pace with a good run on track.
He was 0.503s under Razgatlioglu’s fastest time but only 0.027s behind Rea.
“Today we just tried to compare both rear tyre from Pirelli. This morning I did almost a race distance with the new compound and the feeling wasn’t to bad and in fact I did my best lap time in Lap 20. But in the afternoon, with the standard SC0 I felt quite good, good pace, good rhythm and good feeling with the bike… even better than in the morning. When I put again the new SC0 and I had a very bad feeling. I don’t know if it was due to this afternoon’s conditions or if the tyre had a problem. It has been positive because we could compare both tyre. The bike set up is quite good and work pretty well from this morning. Now we tried to be focus tomorrow just in one tyre and to fine tune.”

P6 – Iker Lecuona (Team HRC)
Lecuona was sixth at the end of Friday for his first time at Portimao with WorldSBK.
He continued to try and make gains with rear grip, something he spent time testing during a post-Catalunya Round test at MotorLand Aragon.
“It was a really good Friday. With the bike I felt strong, confident… I can’t compare with Jonny and Alvaro. In FP2, Alvaro was behind me and I could feel the difference, and with Jonny in the last lap as well. I feel good because I have very good speed, I go fast, I’m able to go alone so I don’t follow anyone … I have the pace and this is important for everyone. We focus on trying to save the tyre because in the end of races, we struggle a lot with the grip, we dropped a lot and loose everything in the last laps. We’re trying to improve this area on the bike. We found something. We worked very hard in the last test. I felt good today with the bike and we have a constant pace.”