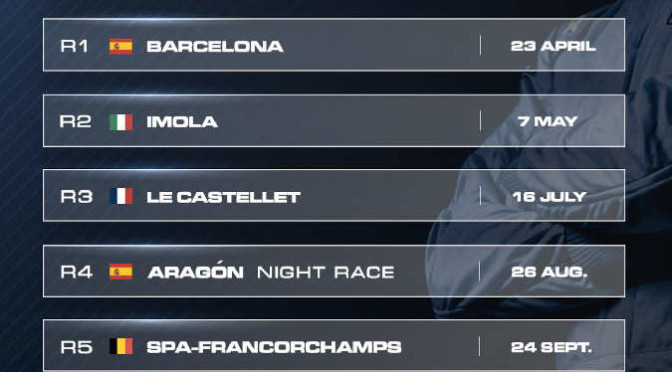 The 2023 European Le Mans Series calendar has been unveiled with six 4-hour races being held next season, with Motorland Aragón added to the schedule for the first time.The season will begin in Spain with the Official Tests and first round being held at the Circuit de Barcelona-Catalunya. The Official Tests will be held on the 19/20 April, with Round 1 on Sunday 23 April.Round 2 will be held in Italy on Sunday 7 May, with the Autodromo Internazionale Enzo e Dino Ferrari hosting the 4 Hours of Imola for the second time since the venue’s return to the ELMS calendar in 2022.
After a break for the 24 Hours of Le Mans in June, which will be celebrating the 100th Anniversary of the first race in 1923, the ELMS returns with the 4 Hours of Le Castellet on Sunday 16 July.
Motorland Aragón will become the latest new addition to the ELMS calendar, with the Spanish circuit hosting a race into the night on Saturday 26 August.
Then it is back to Belgium for the 4 Hours of Spa-Francorchamps for a race on the longest and most challenging circuit on the ELMS calendar on Sunday 24 September.
The 2023 season will conclude with the 4 Hours of Portimão on the ‘roller-coaster’ track at the Autodromo Internacional do Algarve on Sunday 15 October.
Frédéric Lequien, CEO of Le Mans Endurance Management (LMEM): “We are very pleased to announce this exciting 2023 calendar for the European Le Mans Series, which includes a brand-new circuit and a night-race format for the ELMS at Motorland Aragón to present a fresh challenge for our teams and drivers. The new calendar is a great mix of tops European circuits. We look forward to seeing everyone next season in what will be a very special year for Endurance Racing”
Pierre Fillon, President of the Automobile Club de l’Ouest (ACO): “The European Le Mans Series is a major component of the Endurance pyramid. The quality and size of the grid increases year on year and the race calendar reflects that progress, with rounds held at Europe’s most prestigious venues. The unique format chosen for the 4 Hours of Aragón promises two full days of exciting track action with the race itself finishing after nightfall.”