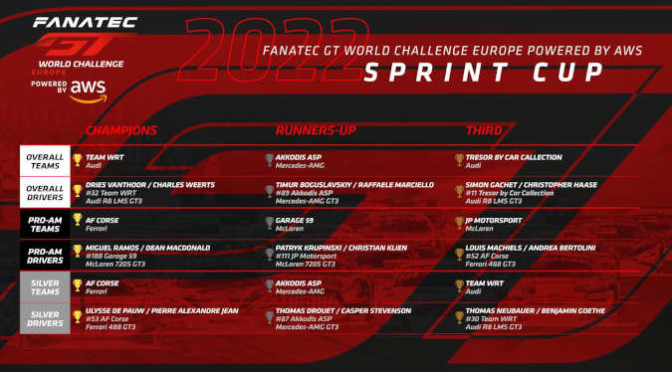 It was the perfect finishing touch from Team WRT ace Weerts, who just 24 hours earlier had wrapped up a third straight Fanatec GT Sprint drivers’ crown alongside Dries Vanthoor. This was the end of an era, too, as the Belgian squad added a ninth and final Fanatec GT Sprint teams’ title using Audi machinery.
The Silver Cup brought another superstar performance from AF Corse duo Ulysse De Pauw and Pierre Alexandre Jean, as well as a popular comeback victory for Madpanda Motorsport, while there were celebrations all round in Pro-Am as Garage 59 sealed the drivers’ title, AF Corse clinched the teams’ crown and JP Motorsport swept the weekend. These are the stories and statistics from the final stop on the 2022 Fanatec GT Sprint schedule.

* * *
Vanthoor and Weerts earned their third successive Fanatec GT Sprint title by finishing third in Saturday’s opening race. All three championships have been secured at different circuits: 2020 was won at Barcelona, 2021 came at Brands Hatch, while 2022 was settled at Valencia.

* * *
Their race 2 win will not be forgotten in a hurry. With just six minutes on the clock Weerts was 26 seconds off the lead, but the slick-shod #32 Audi made up an extraordinary amount of time on the #89 Akkodis ASP Mercedes-AMG to snatch a famous victory. Weerts was 5.1 seconds faster than Timur Boguslavskiy on lap 30, 7.3 seconds faster on lap 31, and an astonishing 9.1 faster on the penultimate tour.

* * *
A WRT victory was not inevitable. Had the flying #25 Saintéloc Junior Team Audi made an immediate pass on Boguslavskiy, Aurélien Panis would most likely have won the race. The Frenchman’s lap times were good enough to be out of Weerts’ reach, even with the slick tyre advantage, but he lost three seconds behind the #89 Mercedes-AMG on the penultimate lap.

* * *
Amid all the drama, it may have gone unnoticed that the Fanatec GT Sprint teams’ title changed hands during the closing moments of the race. With just two minutes left on the clock, the championship was heading to Akkodis ASP; only when Weerts passed Christopher Haase (#11 Tresor by Car Collection Audi) for third did Team WRT move back to the top of the standings.

* * *
Sunday’s win ensured that Dries Vanthoor became the record holder for Fanatec GT Sprint wins with 15, moving one clear of elder brother Laurens. Weerts now has 12 victories, putting him level with 2015 series champion Maxi Buhk and behind only the Vanthoor brothers.

* * *
Though his car fell from first to third on the final lap of Sunday’s race, Raffaele Marciello wrapped up a second Fanatec GT World Challenge Europe Powered by AWS drivers’ title at Valencia. The Mercedes-AMG ace previously won the big prize in 2018 and can add a maiden Endurance title next time out at Barcelona.

* * *
Marciello has been in sensational form this season. The Akkodis ASP driver scored four pole positions from a possible five and, on each occasion, went on to build a sizeable lead at the head of the field. What’s more, he and Boguslavskiy accumulated a points total that would have secured the title in every previous Sprint season.

* * *
AF Corse won Saturday’s race with another hugely impressive display from the young pairing of Ulysse De Pauw and Pierre Alexandre Jean. The #52 Ferrari started from overall pole and, in a repeat of the season-opening contest at Brands Hatch, both drivers had the speed and composure to maintain their position at the head of the field.

This marks the first time that a Silver Cup crew has won overall twice in the same season. What’s more, De Pauw and Jean were on course to take third place in the overall Fanatec GT Sprint drivers’ standings, but technical problems on Sunday consigned them to 17th in the closing race.

* * *
Instead, the final spot on the championship podium went to Christopher Haase and Simon Gachet. The #11 Tresor by Car Collection Audi earned a fourth podium of 2022 on Saturday and finished P4 on Sunday to cap a fine maiden season for the Italian squad. Tresor by Car Collection secured third in the final Fanatec GT Sprint teams’ standings and could match that position in the overall series championship.

* * *
The sheer drama of Sunday’s final lap masked a number of standout results, including four Silver Cup crews finishing in the overall top-10. The best of them was the class-winning Madpanda Motorsport Mercedes-AMG, which was making its first Fanatec GT Sprint outing of 2022.

* * *
Despite losing the win, this was still the #159 Garage 59 McLaren’s best finish of the season, both overall and in class. It followed an impressive qualifying and opening stint from Nicolai Kjærgaard, who was standing in for the unwell Ethan Simoni at Valencia.

* * *
Sky Tempesta Racing also secured a best result of 2022 in the final race. The #93 Mercedes-AMG came home 10th overall and fourth in class with Chris Froggatt and Eddie Cheever III at the wheel.

* * *
Saturday’s race followed a far more familiar pattern in the Silver Cup, with De Pauw and Jean bagging a sixth class win of the season ahead of the #30 Team WRT Audi and the #87 Akkodis ASP Mercedes-AMG. The latter crew of Thomas Drouet and Casper Stevenson earned runner-up spot in the Sprint standings behind the dominant AF Corse duo.

* * *
On Sunday, the Team WRT pairing of Thomas Neubauer and Benji Goethe wrapped up the Fanatec GT World Challenge Europe Powered by AWS Silver Cup drivers’ crown, adding to the Endurance title they sealed at Hockenheim. Only one Silver championship remains unsettled ahead of the Barcelona finale, with WRT enjoying a 23-point lead over Attempto Racing in the combined teams’ classification.

* * *
In the Pro-Am class, McLaren squad JP Motorsport swept the weekend thanks to Patryk Krupinski and Christian Klien. This was enough to promote the duo to second in the end-of-seasons standings and was the perfect response following a nightmare weekend at Misano.

* * *
Garage 59 wrapped up the drivers’ crown on Saturday, despite the #188 McLaren clashing with the #52 AF Corse Ferrari during the closing stages and finishing fourth in class. While the Valencia weekend was not perfect Miguel Ramos and Dean MacDonald had previously won four races from five, all but securing the championship before they arrived in Spain.

* * *
Ramos earned a second consecutive Fanatec GT Sprint title in the Pro-Am class, doing so with a different team, car and co-driver from his 2021 success. The Portuguese racer is among the most experienced on the grid, with his career stretching back to the 2003 FIA GT Championship and including several championships triumphs.

* * *
In stark contrast, this was MacDonald’s first title in car racing. The Scottish driver enjoyed considerable success in karts before moving up through the ranks of the IntelligentMoney British GT Championship and GT4 European Series. The 2022 campaign marked his first in international GT3 racing and featured a number of impressive qualifying performances.

* * *
AF Corse took the Fanatec GT Sprint teams’ championship in the Pro-Am class, finishing three points ahead of Garage 59. The same two squads will fight it out for the Fanatec GT World Challenge Europe Powered by AWS teams’ title in the season finale at Circuit de Barcelona-Catalunya.

* * *
Audi Sport has edged closer to Mercedes-AMG at the top of the global Fanatec GT World Challenge Powered by AWS standings, though the lead still stands at 3,786 points. With six events to run, the title looks to be heading to Affalterbach for a fourth year in succession. Audi appears safe in second spot, while Saturday’s overall and Silver Cup victory for AF Corse has secured Ferrari’s grip on third in the standings.

* * *
As confirmed by Stéphane Ratel ahead of the TotalEnergies 24 Hours of Spa, the trip to Valencia will remain part of the Fanatec GT Sprint calendar in 2023. The Spanish track debuted in 2021 and this year attracted 16,500 spectators to enjoy a programme that also included the Fanatec GT2 European Series, Porsche Carrera Cup France, FFSA F4 French Championship and Volrace.