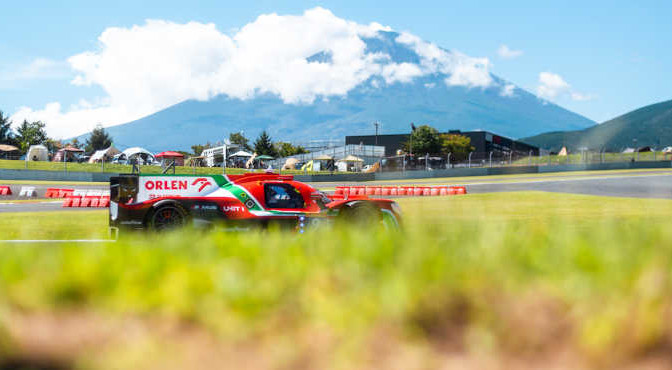 Prema ORLEN Team claimed a sixth-place finish today at Fuji Speedway in the penultimate round of the 2022 FIA World Endurance Championship. The team lined-up for its first Japanese experience with good hope and motivation, but struggled to find pace and could not recover as the weekend went on despite not making mistakes on track and in the pits.
Despite a clean and skilled drive by the trio of Lorenzo Colombo, Louis Delétraz and Robert Kubica, the race didn’t provide much satisfaction. In qualifying, Kubica did his 100 percent to extract the maximum out of the #9 Oreca LMP2 racecar, but had to settle for P9. The team worked hard to find more grip and balance. At the start of the 6-Hour race, a stellar drive by Delétraz saw him fight back to P3 as he made quick work of the silver-rated competitors.
Colombo provided a great stint as well. The team’s silver driver held onto the top-5 and maximised his driving, but when Kubica went in the car for the mid-race push, it was clear that the car’s pace was not enough to stay towards the front. The team opted for a late-stop approach, but the strategy eventually did not pay off. Delétraz put up another flawless run in the end, but emerged from the last pit-stop in P6 and that’s where he eventually crossed the line.
Even though the result didn’t coincide with the expectations, the whole team greatly appreciated racing for the first time in Japan and the amazing support of the Japanese fans. The final round for WEC will be at Bahrain International Circuit on the 12th of November. During the break, the team will go back on-track for the two final rounds of the European Le Mans Series at Spa-Francorchamps and Portimao.

#9
LORENZO COLOMBO
“Coming here to Japan we struggled since Friday. We tried our best to improve the car, but the other teams improved a lot as well, so we couldn’t close the gap. When you arrive in a race with the field so close like in Fuji, it’s hard to make you’re way through if you’re lacking. With the strategy in the first part of the race, we were very competitive, and also better than the others on fuel. Robert and Louis tried to push harder, and we adapted the strategy to gain on the cars in front but still, didn’t pay off. It’s P6, we will try again in the next round in Bahrain.”

#9
LOUIS DELETRAZ
“We have been struggling for pace since FP1 and we were clearly behind WRT, Jota, and United. We worked hard but it seemed it was not our weekend. The start was great, I came back a few positions, but then when the race settled and it was all about the pace we were struggling. We tried something with a strategy that was hard, but in the end, that’s how it is, P6. We will come back stronger in Bahrain.”

#9
ROBERT KUBICA
“Not the weekend we wanted. From the race point of view, we made the correct calls, we didn’t make any mistakes, but we just didn’t have pace. Miracles don’t happen overnight and all weekend we have been lacking general grip. We were never really competitive and when we had to push, like in the final hours of the race when the grip improved, the car was not competitive. We will have to sit down, think about it, try to understand what happened, and come back stronger in Bahrain.”