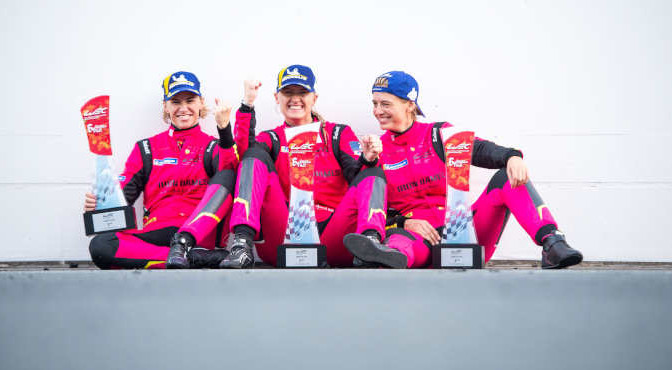 Today, Italian racing team, Iron Lynx celebrated a historic milestone moment for women in motorsport as its all-female line-up, the Iron Dames, claimed the FIA World Endurance Championship (WEC) podium finish in Asia at the Fuji Speedway.
Sarah Bovy started the #85 Iron Dames machine from second place in the LMGTE Am order after a great qualifying effort, and took the class lead inside the first ten minutes. She put in a great double-stint and handed the car over to Rahel Frey in fourth place.
Starting her first stint just before the two-hour mark, Rahel did well to avoid a slow LMP2 car rejoining after a spin and still hold onto fourth. She had an amazing battle with the Aston Martins as they ran the #85 car close for much of the race.
All three drivers kept the #85 car out of trouble throughout a race run at full pace, with no safety cars or Full-Course Yellow period throughout the entire six hours making it a very physical race.
Rahel pitted from a temporary lead to hand the car to Michelle Gatting for the Danish driver’s first stint. The #85 car had a great chance to solidify their fourth place in the LMGTE Am standings with a strong result.
Michelle kept things clean and stayed in the top three throughout both her stints, her great pace helping the team stay in a good position entering the final phase of the race. She pitted after a double-stint for Rahel to take advantage of a good strategy and bring the #85 car home in second place for a hard-earned podium in Asia.

Claudio Schiavoni started the #60 Iron Lynx Ferrari 488 GTE Evo from tenth place in LMGTE Am, with the car 11th in the standings before the green flag flew. He stayed in the car after the first round of pitstops and set his best first sector of the race during his second stint, despite a spin and an extra pitstop in the first hour.
He handed over to Matteo Cressoni just before the two-hour mark as the team looked to move the #60 car back up the order. Matteo and Rahel were the fastest two drivers in the LMGTE Am field in the middle of the six-hour encounter, helping Iron Lynx and the Iron Dames end their races strongly.
The team took advantage of its strong pace and Porsche’s struggles in the Japanese heat to push on. Giancarlo Fisichella kept it clean throughout his first stint and handed the #60 car back to Matteo. He put in a very strong stint before Giancarlo survived a late drive-through penalty to bring the car to the flag just outside the top ten.
The Iron Dames have closed the gap to third place in the LMGTE Am championship standings.

Iron Lynx Team Principal, Andrea Piccini said: “We are obviously very happy with the result of the Iron Dames; I think we did almost a perfect race with them. We had good speed, good pace and a good strategy.
“At times we struggled a little bit with traffic because and on this track it’s easy to lose one or two seconds a lap if you hit traffic in the wrong spot.
“My thanks goes to the mechanics who did very good pitstops so we always gained a bit of time and P2 was a great reward for the hard work of all the team.
“It was more difficult for car #60, after a very good start with Claudio. The pace was really promising and we were in a strong place for the race until, fighting the car in front, he had a spin and flat-spotted the tyres. From there we had to fight with an unbalanced car for several laps and lost quite some time.

“Matteo and Giancarlo did a very good job through the race. However, while fighting for P8 Giancarlo got a drive-through and we threw away all our hard work during the race. We’ll try even harder next race.”

The FIA World Endurance Championship returns for the final round at the Bahrain International Circuit on 11/12 November.