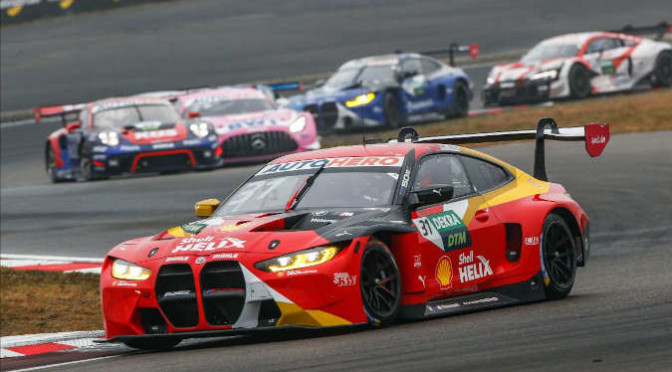 Three, two, one – DTM champion. This weekend (9-11 September), Spa-Francorchamps is the third to last fixture of the 2022 DTM season that has been really intense so far, the battle for the title is notably tightening up. As the DTM championship leader (110 points), Sheldon van der Linde doesn’t want to hear about that at present. “I am not focussed on the championship, I simply want to score as many points as possible,” the 23-year-old South African from the Schubert Motorsport BMW team stated in the usual DTM press conference. René Rast (GER), who with the ABT Audi dropped back to fourth in the standings with 81 points behind Mirko Bortolotti (ITA, 89) with the GRT Lamborghini and Lucas Auer (AUT, 85) with the WINWARD Mercedes-AMG at Nürburgring most recently, on the other hand, wants to do everything to keep his chances of winning the title alive. “The goal is to score many points and to keep all the title rivals at bay.”

In the battle for the title, the two Belgians in the field of 27 DTM race cars aren’t playing a role. Porsche works driver Laurens Vanthoor candidly admits: “This is the toughest season for me since a long time.” As the main reasons, he points out to the fact that it is the first season in DTM for himself, for his team SSR Performance and for Porsche. “We have good engineers and we are working to improve further,” says Vanthoor, who has set himself a clear goal: “I want to show more and if possible score a win or at least be on the podium once.” Teammate Dennis Olsen (NOR) has already done so twice. As far as Vanthoor is concerned, his home track is the best venue to achieve this. After all, this is where he had one of his biggest achievements by winning the Spa 24-hour race together with René Rast and Markus Winkelhock in 2014.

For his compatriot Esteban Muth, it is about scoring his first points of the season. “My second season is harder than the first one, we are struggling during qualifying in particular. We have to get everything aligned, then it will work out with scoring points as well.” The 20-year-old local hero is specially motivated by the support from Princess Delphine who has designed a new livery for his Walkenhorst BMW. “Racing in front of a home crowd are always something special and the support by Princess Delphine makes it even better.” The new livery will be unveiled on Friday prior to the start of the first free practice session at the Spa-Francorchamps race track.

During the press conference, all drivers agreed that Spa-Francorchamps, the longest track on the DTM calendar at 7.004 kilometres, ranks among the best circuits out there. “Spa is one of the world’s best race tracks,“ says Clemens Schmid (GRT Lamborghini). “I like Spa very much.” No surprise as the Austrian already claimed pole position for the 24-hour classic at the demanding and undulating track in the Ardennes once in the past. Laurens Vanthoor is convinced: “This circuit allows for really good racing. The track is fun to drive for us as the drivers and it will be highly interesting.” While Muth will be racing at Spa in a GT3 car for the first time (“It will be a new challenge for me”), three-time DTM champion René Rast already tested at the Ardennes circuit as recently as the beginning of the month. “Basically, the track has remained unchanged, the only thing is that there are less bumps thanks to parts that have been resurfaced and there are more gravel beds, too.” Sheldon van der Linde, who already was on the podium at Spa together with his brother Kelvin and would just love to celebrate a 1-2 for the brother pairing again at Spa, just like they did at Nürburgring, says: “It is an old-school track that is great fun.”

The fact that the eleventh and twelfth race of the season (race start on Saturday and Sunday at 1.30pm CEST, live on ProSieben from 1pm CEST and in the online stream at tv.DTM.com) have been reduced by five minutes to 50 minutes plus one lap doesn’t change anything in the strategy for the drivers and teams. “We are pushing flat-out from start to finish like we always do,” Muth emphasizes. The drivers do think about the weather. “We have an eye on the weather radar, especially on Saturday with a possibility of rain. But we tested in the rain recently already,” DTM points’ leader Sheldon van der Linde also feels well prepared for the sometimes tricky weather conditions in the Ardennes.