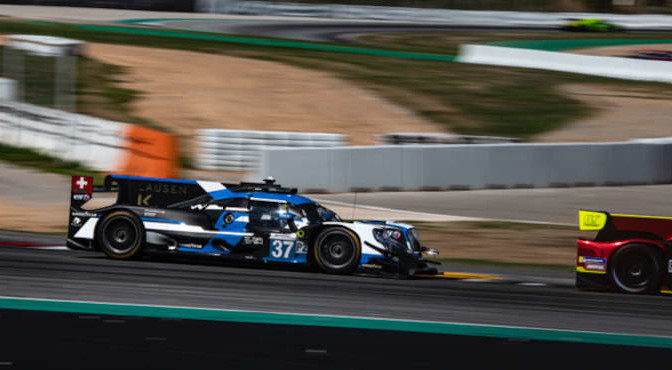 The heat was on, both on and off the track, at round four of the European Le Mans Series (ELMS) in Barcelona. Niklas Krütten ended the sizzling battle in Spain on the podium. Together with team-mates Nicolas Lapierre (FRA) and Yifei Ye (CHN), the COOL Racing driver came home third in the LMP2 class after four hours and 616.85 kilometres of racing. This was the second podium of the season for the 19-year-old from Trier. The former ADAC Stiftung Sport driver currently lies fifth in the Drivers’ Championship, with COOL Racing also fifth in the Team competition.

Air temperatures of 32 degrees and track temperatures approaching 50 degrees made the 4 Hours of Barcelona extra challenging for the drivers. After a strong second place in qualifying, Krütten was first behind the wheel of the #37 Oreca 07 Gibson LMP2 car. He became embroiled in a thrilling battle with his rivals, with positions changing hands on a regular basis. After 47 laps, the team cleverly brought Krütten in for a pit stop and driver changeover, which allowed the car to regain second place. Lapierre was able to fend off the attacks from the opposition until lap 68, when he eventually lost a position. The final driver, Ye, brought the car home in third place to secure a spot on the podium for COOL Racing.

Niklas Krütten: “That was a really hot battle here in Barcelona. Nevertheless, the race was a lot of fun. It was very tight at the front, and I had some great battles. The second and third-placed cars were trading positions all the time. The disadvantage of that is that you often end up losing contact with the car in front. However, I am not unhappy: that is my second podium in four races in this ELMS season.”

Round five of the ELMS takes place in Spa-Francorchamps, Belgium, on 25th September.