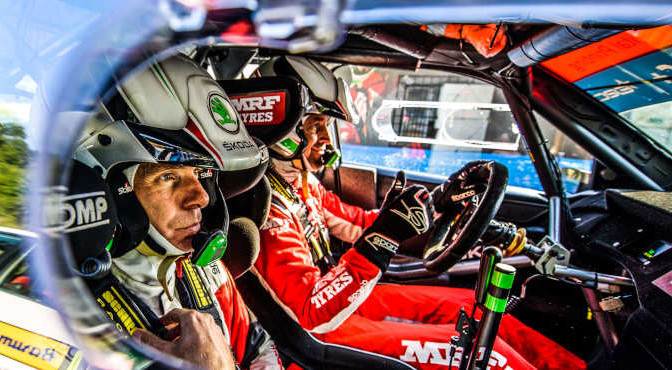 It was yet another frenetic day of action at the FIA European Rally Championship’s seventh and penultimate round as ever-changing weather conditions kept the drivers on their toes.

Heavy rain showers and waterlogged asphalt roads in one test would be followed by dry conditions and blue skies in the next, while Zlín’s famous forested sections became muddier and slippier with every car which passed.

But, on a day of inconsistencies, Kopecký was Mr. Consistent.

Having duly earned himself a hefty 34.6sec advantage on Saturday, Kopecký’s approach switched to lead preservation. He took fewer risks, made no mistakes and, despite failing to win any of Sunday’s stages, still pulled further away from his rivals.

The Škoda Fabia Rally2 driver’s clinical performance was rewarded as he ended 37.5sec clear at the top – winning his home rally for the 10th time in his career.

“This one was one of the most difficult wins of them all because the conditions were really crazy,” said Kopecký. “Even today, the rain was following us on every single stage. Thanks a lot to everyone who was helping us – it was a very good weekend for us.”

Filip Mareš emerged on top of a three-way scrap with Simon Wagner and Erik Cais for the runner-up spot. It was a clean final day for the local star and he headed Wagner by a mere 1.8sec at close of play.

For Wagner, there were mixed emotions. He ran wide on an innocuous left-hander in the Power Stage, dropping at least five seconds as he floored the throttle to pull his Fabia out of a ditch. Without that moment, second overall could have been his.

Cais – the only non Škoda driver in the top 10 – was also disappointed. For the second year in a row, final stage demons struck – this time in the form of a rear left puncture which denied the youngster any chance of a podium. He ended 7.0sec behind Wagner in a Ford Fiesta Rally2.

Almost four minutes behind was Norbert Herczig, who secured his best result of the season in fifth overall. He headed Team MRF Tyres team-mate Simone Campedelli by just 24.3sec, with home hero Martin László over two minutes in arrears.

The ERC season concludes at RallyRACC Catalunya – Costa Daurada on 20 – 22 October. The fixture is based in Salou.